The James Webb Space Telescope primary mirror is now fully unfolded, which successfully completes the mission’s major deployments. The starboard side of the primary mirror was released into place today, completing a two-week long, complex deployment sequence. The mirror of the most powerful space telescope ever built is now open, preparing to “unfold the Universe.”

The procedure of latching the mirror in place will take a few hours to complete, but should be finished by later on January 8. However, much work still remains before JWST can begin to operate in space. Five months of cooling, aligning, and commissioning the telescope and all the instruments will need to take place before the science can begin.

“To quote Mr. Churchill, now this is not the end. It is not even the beginning of the end. But it is, perhaps, the end of the beginning,” said Mark McCaughrean, the European Space Agency’s Senior Advisor for Science & Exploration and part of JWST’s Science Working Group, on Twitter. “But today is a big step. Huge congrats to all the teams involved!”

The Mission Operations Center at the Space Telescope Science Institute in Maryland confirmed the completion of the Webb telescope’s final major deployment at 10:28am EST (1528 GMT), at a mission elapsed time of 14 days, 3 hours, 8 minutes. 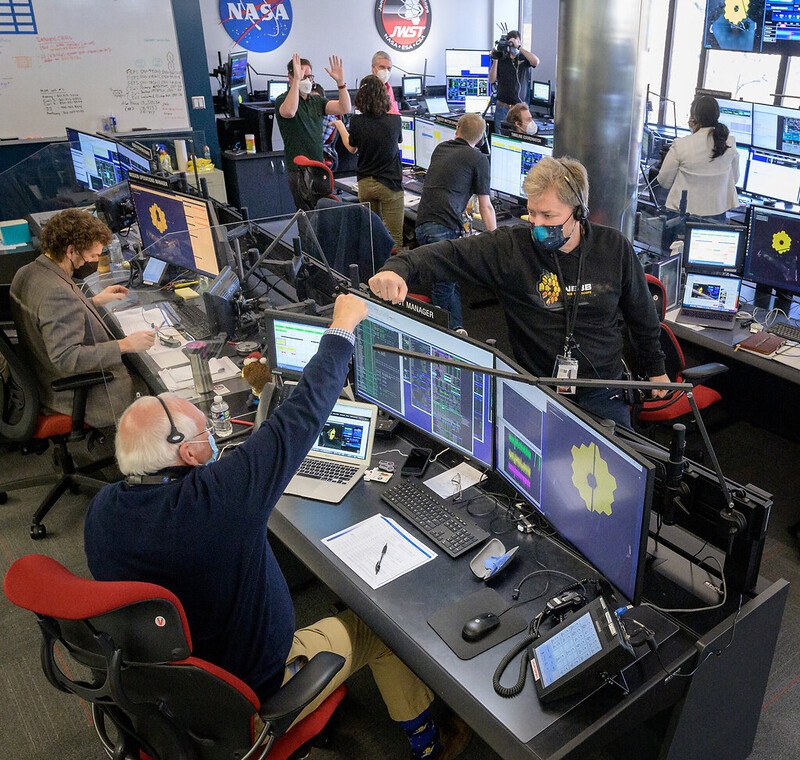 Engineering teams had a quick celebration as the second primary mirror wing was fully unfolded, before beginning the process of latching the mirror wing into place.

Webb will study every phase of cosmic history—from within our solar system to the most distant observable galaxies in the early universe. “A fully unfolded primary mirror is just a great thing to see and we’re ready to start aligning those mirrors,” said Lee Feinberg, Webb’s Telescope Element Manager at Goddard Spaceflight Center, one of the senior engineers on the project.

Feinberg explained during a broadcast on NASA TV that there are several different phases to aligning all 18 mirror segments in order for them to work as one giant mirror. Now fully deployed, the primary mirror stretches 6.5 meters (21 feet) across.  Each segment is controlled by seven actuators which can finely align the mirrors. Feinberg expects the alignment and testing to be fully complete by sometime in March, 2022. Then the secondary mirror will be aligned with the primary.

Two weeks after launch, @NASAWebb has hit its next biggest milestone: the mirrors have completed deployment and the next-generation telescope has taken its final form.

Next up for Webb? Five months of alignment and calibration before we start getting images: pic.twitter.com/BOj5O1HS37

Get the latest updates on Webb at NASA’s Where’s Webb
Find info on more ways to get additional updates here.