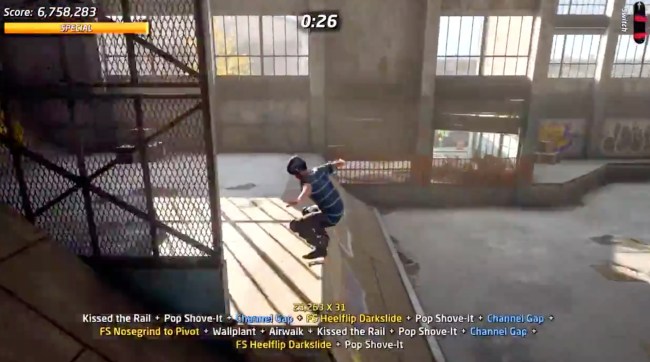 I don’t know about you, but the rerelease of Tony Hawk’s Pro Skater 1+2 has made me feel a little bit better about how this year has panned out. That video of Tony Hawk shredding the Warehouse in real life? Pure joy. Just watching it made me feel like I was pulling off a heel flip. In every single way, the resurgence of the game is throwback to chilling after school in the basement with friends with Mt Dews and Cool Ranch Doritos, in those carefree years of Woodstock 99 and Airwalks.

Not to get carried away with the mushy feelings and nostalgia, but one of the great things about Tony Hawk Pro Skater is the simplicity of the game. Unlike the frenzied atmosphere of modern multiplayer battle royale video games, your biggest opponent in Tony Hawk is yourself, first, and a little competitive oneupmanship with your friends, second.

Just you vs. your last high score in the park for two minutes, figuring out how to mash together a series epic combos better than your last.

Which brings us to *this* incredible session, pulled off by Twitter’s Patrick Kulikowski.

Whatever your highest score in Tony Hawk is, I guarantee it’s not anywhere close to his: 10 million points via a series of epic, never-ending combos in The Warehouse.

Seeing skills like this in the flesh make you realize you’re absolute trash at video games.

Incredibly, Patrick was pretty close to pulling off another incredible combo in the last couple seconds of the game before time ran out and he ate pavement.

And there it effing is. 10 million in a single 2-minute session. Jesus. #TonyHawk #THPShttps://t.co/zHRvGu9M43 pic.twitter.com/v25GrJJwVl

To the surprise of absolutely no one, Patrick’s friends are leaving his multiplayer invites on read.

Apparently my 1337 sk1llZ in Tony Hawk’s Pro Skater have guaranteed that no friend will ever want to play multiplayer with me, ever.

And, of course, a gamer talking trash puts it in perspective, in the grand scheme of Tony Hawk Pro Skater history.

I mean if you owned the original way back when these scores weren’t worth anything. Everyone was serving this stuff up. You’d get bored and make 1

5 Times When You Can (And Even Should) Be Late

Podcast #644: How to Develop Greater Self-Awareness

Podcast #754: A Surprising Theory on Why We Get Fat