In February, the city of Toronto announced plans for a new development along its waterfront. They read like a wish list for any passionate urbanist: 800 affordable apartments, a two-acre forest, a rooftop farm, a new arts venue focused on indigenous culture, and a pledge to be zero-carbon.

The idea of an affordable, off-the-grid Eden in the heart of the city sounds great. But there was an entirely different urban utopia planned for this same 12-acre plot, known as Quayside, just a few years ago. It was going to be the place where Sidewalk Labs, the urban innovation arm of Alphabet, was going to prove out its vision for the smart city.

Sandwiched between the elevated Gardiner Expressway and Lake Ontario, and occupied by a few one-story commercial buildings and a mothballed grain silo, Quayside shouldn’t have been that hard to develop. But controversy ensued almost from the moment in October 2017 that Waterfront Toronto, a governmental agency overseeing the redevelopment of 2,000 acres along the lake shore, announced that Sidewalk had submitted the winning proposal.

Sidewalk’s big idea was flashy new tech. This unassuming section of Toronto was going to become a hub for an optimized urban experience featuring robo-taxis, heated sidewalks, autonomous garbage collection, and an extensive digital layer to monitor everything from street crossings to park bench usage. 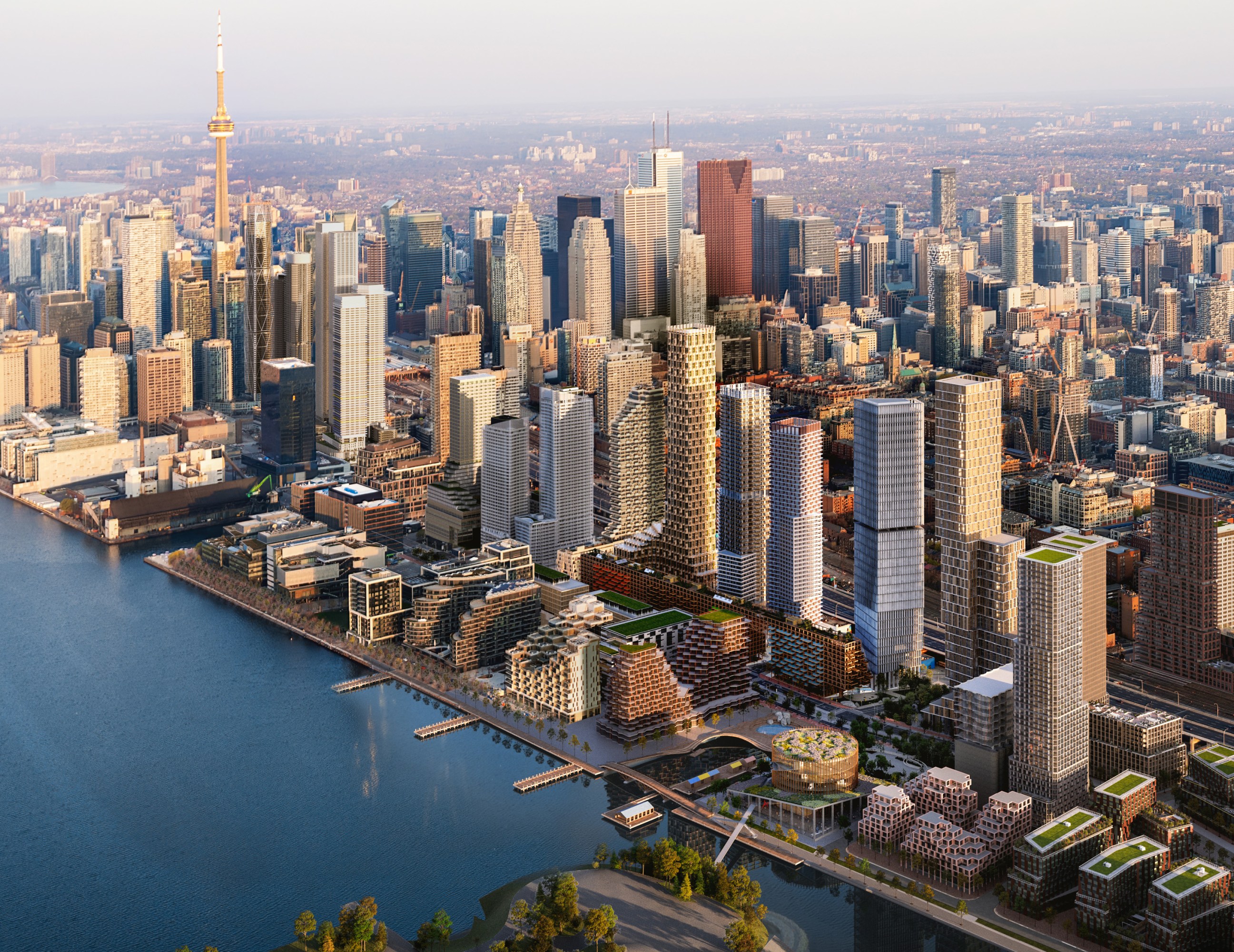 An aerial view of the new proposed plan for the 12-acre site situated along the Toronto waterfront.WATERFRONT TORONTO

Had it succeeded, Quayside could have been a proof of concept, establishing a new development model for cities everywhere. It could have demonstrated that the sensor-­laden smart city model embraced in China and the Persian Gulf has a place in more democratic societies. Instead, Sidewalk Labs’ two-and-a-half-year struggle to build a neighborhood “from the internet up” failed to make the case for why anyone might want to live in it.

By May 2020, Sidewalk had pulled the plug, citing “the unprecedented economic uncertainty brought on by the covid-19 pandemic.” But that economic uncertainty came at the tail end of years of public controversy over its $900 million vision for a data-rich city within the city.

It’s hardly unusual for citizens to get up in arms about new development, and utopias fail for all sorts of reasons. But the opposition to Sidewalk’s vision for Toronto wasn’t about things like architectural preservation or the height, density, and style of the proposed buildings—the usual fodder for public outcry. The project’s tech-first approach antagonized many; its seeming lack of seriousness about the privacy concerns of Torontonians was likely the main cause of its demise.

There is far less tolerance in Canada than in the US for private-sector control of public streets and transportation, or for companies’ collecting data on the routine activities of people living their lives.

The shift signaled by the new plan, with its emphasis on wind and rain and birds and bees rather than data, seems like a pragmatic response to the present moment.

“In the US it’s life, liberty, and the pursuit of happiness,” says Alex Ryan, a senior vice president of partnership solutions for the MaRS Discovery District, a Toronto nonprofit founded by a consortium of public and private funders and billed as North America’s largest urban innovation hub. “In Canada it’s peace, order, and good government. Canadians don’t expect the private sector to come in and save us from government, because we have high trust in government.”

With its very top-down approach, Sidewalk failed to comprehend Toronto’s civic culture. Almost every person I spoke with about the project used the word “hubris” or “arrogance” to describe the company’s attitude. Some people used both.

The end of the smart city?

Time and time again, we convince ourselves that the big idea of the moment will not only improve our daily lives but cure society’s ills. In England, the “garden city” movement introduced by the urban planner Ebenezer Howard in 1898 aimed to merge the countryside and the

Did you miss our previous article…
https://www.mansbrand.com/the-download-a-curb-on-climate-action-and-post-roe-period-tracking/

This $1.5 billion startup promised to deliver clean fuels as cheap as gas. Experts are deeply skeptical.

Innovating for the hybrid future of work