>What a massive volcanic eruption looks like from space. The GOES-17 satellite captured images of an umbrella cloud generated by the underwater eruption of the Hunga Tonga-Hunga Ha’apai volcano on Jan. 15, 2022. The Tonga eruption sent crescent-shaped bow shock waves through the atmosphere, as well as numerous lightning strikes. Credits: NASA Earth Observatory image by Joshua Stevens using GOES imagery courtesy of NOAA and NESDIS

Volcanic eruptions do more than send lava and clouds of noxious gas across the landscape, and trigger tsunamis and sonic booms. Sometimes they reach for space! In the case of the January 2022 underwater eruption of Tonga-Hunga Ha’apai, it sent a pressure wave through all altitudes of Earth’s atmosphere. Seismic stations and weather stations around the world (including the one on my front deck) recorded that wave as it boomeranged around the planet! And, there was another surprising result. The Tonga eruption breached Earth’s atmosphere and caused space-weather-like disruptions at the edge of space.

We’re all familiar with the effects of geomagnetic storms high above Earth’s surface. They are triggered by “space weather” conditions, sometimes called “space climate”. Space weather is a product of the solar wind and interactions with magnetic fields throughout the solar system. On Earth, geomagnetic storms are created by the arrival of masses of charged particles from the Sun. When those clouds of energetic particles hit our magnetic field, they disrupt electrical currents in our atmosphere. During most solar outbursts we get lovely displays of northern and southern lights. However, if the storms are strong enough, they can affect satellite communications and shut down power grids on the ground.

Atmospheric physicists spend a lot of time working with solar scientists to predict the solar outbursts that trigger space weather conditions. They also have a good handle on how geomagnetic storms affect the ionosphere. However, they’re still working on an understanding of the connection between the lower atmosphere and geomagnetic activity in near-Earth space.

Given all that, imagine how surprised atmospheric scientists were when they witnessed a disturbance in the upper atmosphere that looked like space weather. It wasn’t due to a solar outburst (although the Sun was active). Instead, the disturbance was one more effect of the volcano doing what volcanoes have done for billions of years.

Here’s what happened. The Tonga eruption sent a huge plume of gases, water vapor, and dust into the sky, and created massive pressure disturbances in the atmosphere. (You can see a pretty spectacular animation of the atmospheric effect here, provided by the New York Times. ) The explosion also created huge windstorms that expanded upward toward space. NASA’s Ionospheric Connection Explorer (ICON) recorded these extreme disturbances. It was launched in 2019 to study how Earth’s weather interacts with space weather. The European Space Agency’s Swarm satellites also detected changes in ionospheric currents during the event. SWARM is part of an Earth explorer program that studies Earth’s magnetic field.

Spotting the Winds from an Eruption 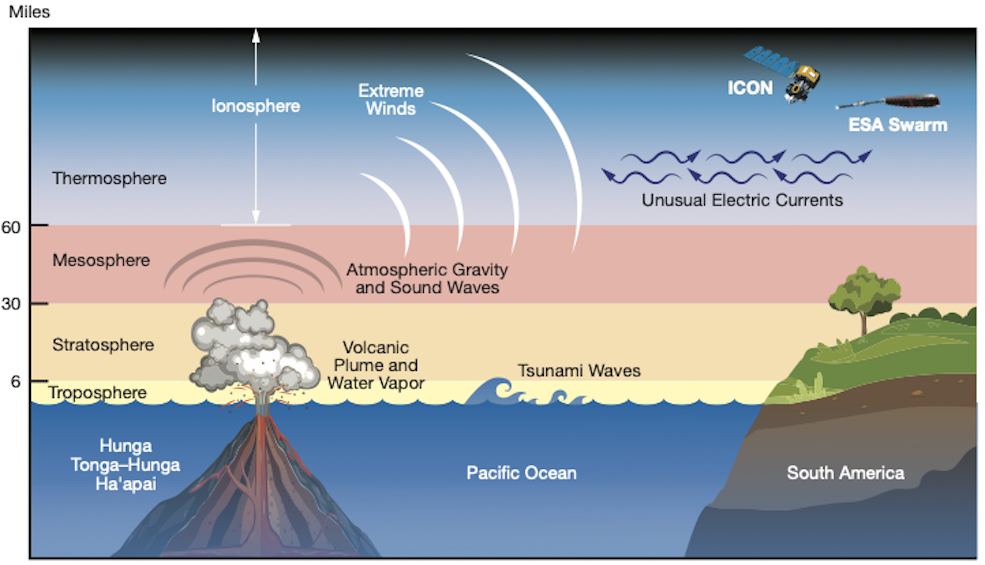 A graphic schematic of the eruption of Tonga-Hunga Ha’apai on January 15, 2022. This shows the effects of the Tonga eruption throughout the atmosphere and near-Earth space at the top of the ionosphere. Credits: NASA’s Goddard Space Flight Center/Mary Pat Hrybyk-Keith

In the hours after the eruption, ICON tracked the upward-traveling winds. They sped up as they moved along. By the time they reached the upper atmosphere, they clocked in at 724 km/hour (450 miles per hour). These extreme hurricane-speed winds disrupted an electric current high in the ionosphere. It’s called the equatorial electrojet. This current flows from east to west over the magnetic equator on the day side of the planet.
Did you miss our previous article…
https://www.mansbrand.com/5-smart-steps-to-lighten-your-backpacking-gear/

4 Tasks You Need to Do When Preparing to Move Abroad

Planet Found in the Habitable Zone of a White Dwarf

ESA’s ARIEL Mission Will Study the Atmospheres of More Than 1,000 Exoplanets