The gig workers fighting back against the algorithms

One place stands out in particular, buzzing with motorcycle drivers clad in green. It’s an informal “base camp,” or meeting point, for drivers with Gojek, Indonesia’s largest ride-hailing firm—part of the backbone of a growing movement of resistance against the dispatch algorithms that dominate their lives.

Gojek offers motorbike taxis in addition to cars. You can see its trademark green jackets and helmets everywhere as its motorbike drivers take passengers on their back seats, and deliver food and parcels. In between gigs, drivers need to recharge their phones, eat food, and wash up. Since the company doesn’t offer many resting facilities, the community created its own spaces like this one in Bendungan Hilir, colloquially known as Benhil.

Regulars of this location prefer it for its proximity to many of the restaurants popular with Gojek’s food delivery customers. They can rest while staying “on-bid,” the local term for being available to take incoming orders—which is crucial because they must maintain that status for hours. 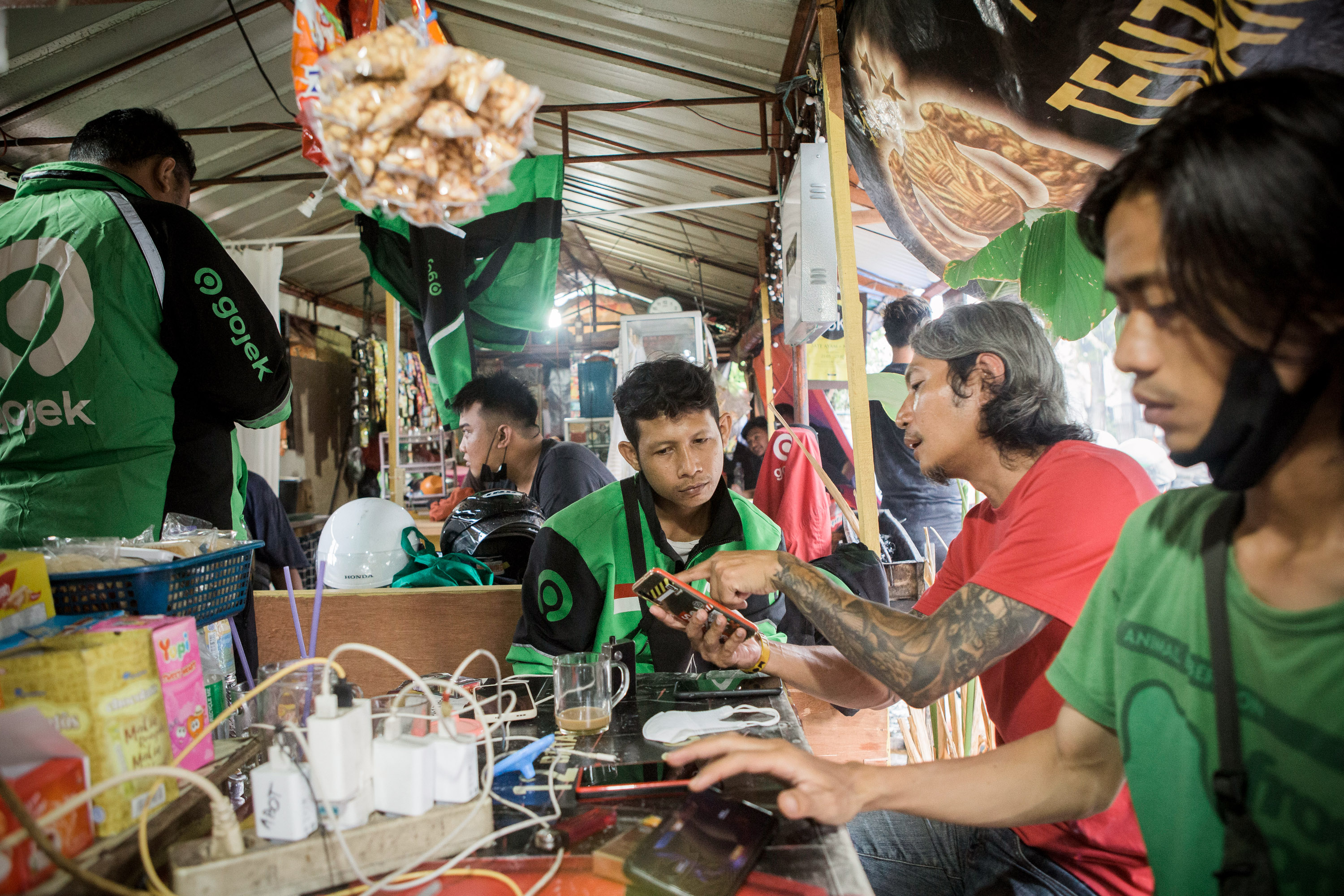 Drivers congregate at base camps like this roadside stall in Benhil, Jakarta to grab a bite, charge their phones, and trade tips for staying safe on the road.AGOES RUDIANTO

Base camps grew out of a tradition that existed before algorithmic ride-hailing services came to Indonesia. Motorcycle drivers used to offer rides to people informally, and they would gather at street corners and food stalls to trade news and gossip or share tips for staying safe on the road. Once Gojek and other apps arrived, the habit carried over, says Rida Qadri, an MIT computational social scientist who studies Jakarta’s ride-hailing driver communities. Base camps became the network through which drivers around the city stayed in tight communication.

This sense of community is now at the heart of what distinguishes Jakarta’s drivers from other gig workers around the world. While such workers everywhere have felt increasingly squeezed and exploited by unforgiving algorithms, most have struggled to organize and effect concrete changes in the platforms that control their work or the government policies that enable their mistreatment.

Part of this is due to the direct challenge that algorithmic management poses to labor organizers: it pits workers against one another and scatters them across a vast geographical area, says Jason Jackson, a political economy and urban planning professor at MIT who advised Qadri’s research. By default, it weakens workers’ abilities to connect in person and build the rapport needed to mobilize a movement.

This effect can be seen in the US especially, where Uber drivers haven’t been able to gain an audience with company leadership, let alone generate the momentum to fight against the company’s sophisticated anti-regulation strategies, says Veena Dubal, a law professor at the University of California Hastings College of the Law, who studies and advocates on behalf of US gig workers. “The digital formation of community just isn’t the same,” she says.

But in Jakarta, things have played out differently. Through base camps, drivers don’t just keep each other informed; they support one another and band together to bend Gojek’s system a little more toward their will. It’s opened up new channels of communication with the company and laid the groundwork for lasting policy change.

Over the years, as more and more workers have fallen under the gaze of algorithms, a growing chorus of experts have noted how platform companies have paralleled the practices of colonial empires in using management tools to surveil and exploit a broad base of cheap labor. But the experience of Jakarta’s

Did you miss our previous article…
https://www.mansbrand.com/the-download-language-preserving-ai-and-hackers-showed-its-frighteningly-easy-to-breach-critical-infrastructure/