Astronomers have watched the expanding debris cloud from the kilonova for years. A clearer picture of what happens in the aftermath is emerging.

A team of researchers have pieced together the story of GW170917 in a paper titled “The emergence of a new source of X-rays from the binary neutron star merger GW170817.” The lead author is Aprajita Hajela, a graduate student in the Department of Physics & Astronomy at Northwestern University. The paper is published in The Astrophysical Journal Letters.

Over the years, astronomers have trained a whole suite of scientific eyes on the expanding cloud, uncovering more and more detail about these cosmic calamities. GW170817 is an unprecedented opportunity to study the kilonova phenomena because astronomers observed gravitational waves and electromagnetic radiation from the merger. The gravitational waves (GW) tell researchers about pre-merger activity, and the electromagnetic observations tell them about the post-merger physical properties.

When two neutron stars merge, it produces a cloud of debris and a burst of light called a kilonova. A pair of astronomers introduced the model for neutron star mergers in 1998. They said that the mergers synthesized radioactive nuclei that provide a long-term heat source for the expanding debris envelope. The optical and infrared light in the kilonova comes from the decay of elements like platinum and gold created during the merger. When LIGO and Virgo detected GWs from GW170817, other telescopes detected the optical and infrared light hours later.

This is the first optical image ever to show an event initially detected as a Gravitational Wave (GW), designated GW170817, pictured left. Afterglow, designated as SSS17a, is left over from the explosion of two neutron stars that collided in galaxy NGC 4993 (shown centre). Only 10.9 hours after triggering the largest astronomical search in history, the Swope 1-m telescope at the Las Campanas Observatory in Chile discovered GW170817’s afterglow. Four days later, the image on the right shows afterglow dimming in brightness and changing from blue to red. CREDIT: Las Campanas Observatory, Carnegie Institution of Washington (Swope + Magellan)

The Chandra X-ray Observatory was also watching. Chandra saw nothing at first, which was unusual. Scientists expect kilonovae to produce x-rays in jets of high-energy particles. Now scientists think there was a jet, but it wasn’t pointed at Earth. Chandra eventually detected x-rays when the jets impacted the surrounding gas and dust, causing them to widen and slow down. Then later in 2018, the x-ray emissions declined again.

The x-rays have remained stable since the end of 2020. The inset x-ray image in the top picture is from Chandra data from December 2020 and January 2021. The x-rays come from both GW170917 and the host galaxy.

Scientists think there could be two explanations for the steadying of x-ray emissions. 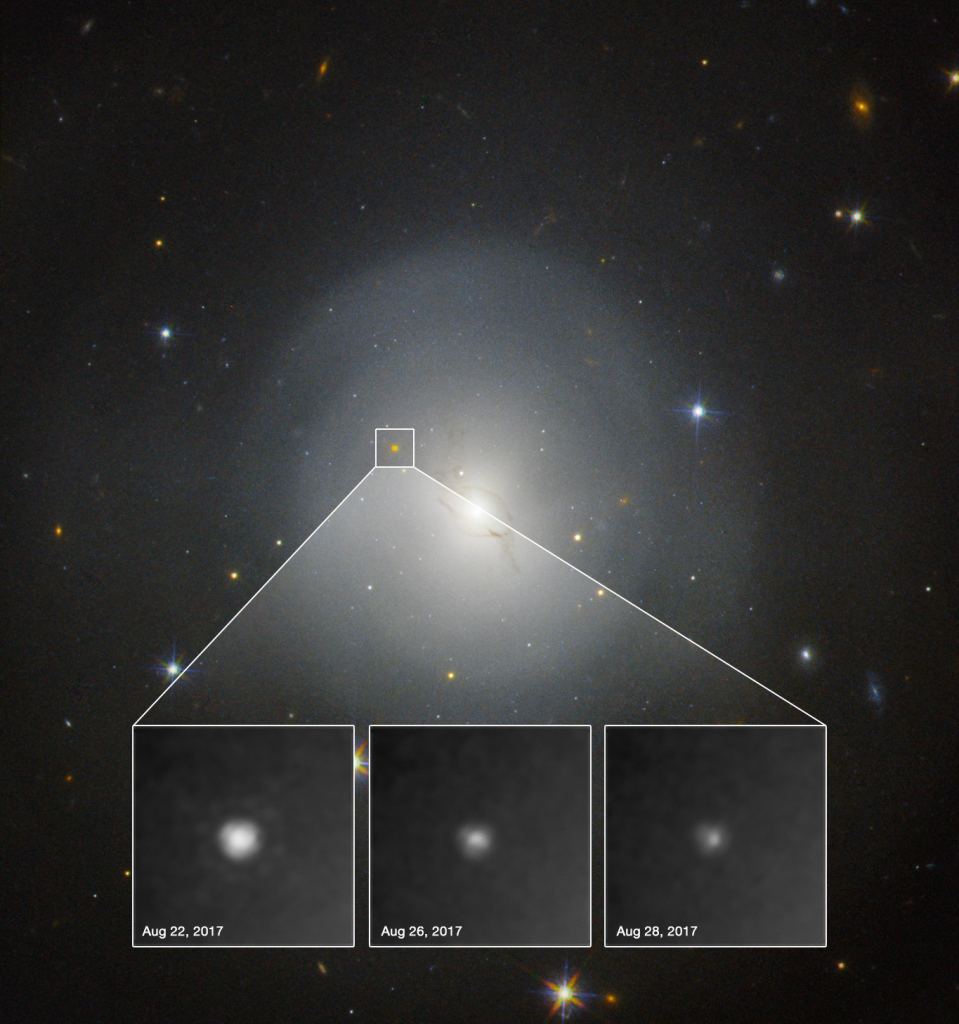 James Webb’s Upper Stage is off to the Launch Site