Spoiler alert: our annual Innovators Under 35 list isn’t actually about what a small group of smart young people have been up to (although that’s certainly part of it.) It’s really about where the world of technology is headed next.

As you read about the problems this year’s winners have set out to solve, you’ll also glimpse the near future of AI, biotech, materials, computing, and the fight against climate change.

To connect the dots, we asked five experts—all judges or former winners—to write short essays about where they see the most promise, and the biggest potential roadblocks, in their respective fields. We hope the list inspires you and gives you a sense of what to expect in the years ahead. 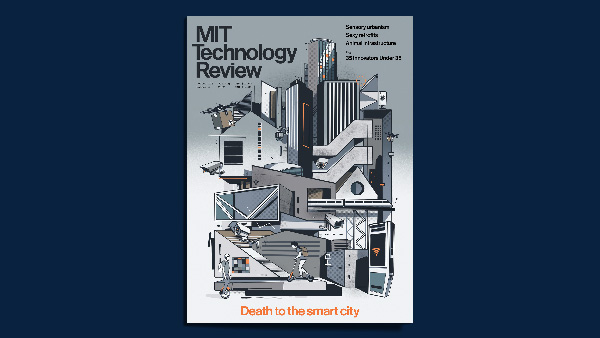 The modern city is a surveillance device. It can track your movements via your license plate, your cell phone, and your face. But go to any city or suburb in the United States and there’s a different type of monitoring happening, one powered by networks of privately owned doorbell cameras, wildlife cameras, and even garden-variety security cameras.

The latest print issue of MIT Technology Review examines why, independently of local governments, we have built our neighborhoods into panopticons: everyone watching everything, all the time. Here is a selection of some of the new stories in the edition, guaranteed to make you wonder whether smart cities really are so smart after all:

– How groups of online neighborhood watchmen are taking the law into their own hands.

– Why Toronto wants you to forget everything you know about smart cities.

– Bike theft is a huge problem. Specialized parking pods could be the answer.

– Public transport wants to kill off cash—but it won’t be as disruptive as you think.

– How a rebellious French city is fighting back against its growing network of police surveillance cameras.

Correction: A story in yesterday’s newsletter stated that the US had 60,000 charging stations for electric vehicles. There are in fact 6,000. We apologize for the error.

1 Donald Trump’s online supporters are confusing themselves
They’re tying themselves in knots trying to debunk former aide Cassidy Hutchinson’s testimony—despite what the evidence says. (WP $)
Hutchinson’s January 6 testimony is the most damning yet. (The Atlantic $)
A summary of the most shocking revelations she made. (Vox)

2 A pro-China influence campaign is targeting the rare earths industry
The group wants to undermine trust in Western companies to further China’s dominance of the sector. (MIT Technology Review)

3 Instagram is hiding posts that mention abortion
Posts offering to sell and mail guns are fine though, apparently. (AP)
Facebook was quick to label an abortion rights vandalism group ‘terrorists.’ (The Intercept)
Big Tech remains silent on questions about data privacy in a post-Roe US. (MIT Technology Review)

4 Bitcoin is poised to drop even further
Just as investors were starting to feel optimistic again. (Bloomberg $)
A guy nicknamed ‘Crypto Jesus’ has allegedly racked up a $47 million crypto debt. (Motherboard)
We’re still waiting for regulators to get their heads around crypto. (Slate $)
Life, death, taxes, bitcoin volatility? (FT $)

5 Solar panels that shield crops from extreme heat are showing promise
But if the crops taste bad, it’s all a colossal waste of money. (NYT $)
These materials were meant to revolutionize the solar industry. Why hasn’t it happened? (MIT Technology Review)
Readying the US for solar power is a thankless task. (Motherboard)

7 A lot of seals look the same to us

8 How a deported hacker’s skills helped him to reenter the US
But also made him a target. (Rest of World)
A former Uber security chief has been accused of hacking.

“She saw something in me”

A locust’s brain has been hacked to sniff out cancer

Our favorite stories of 2021