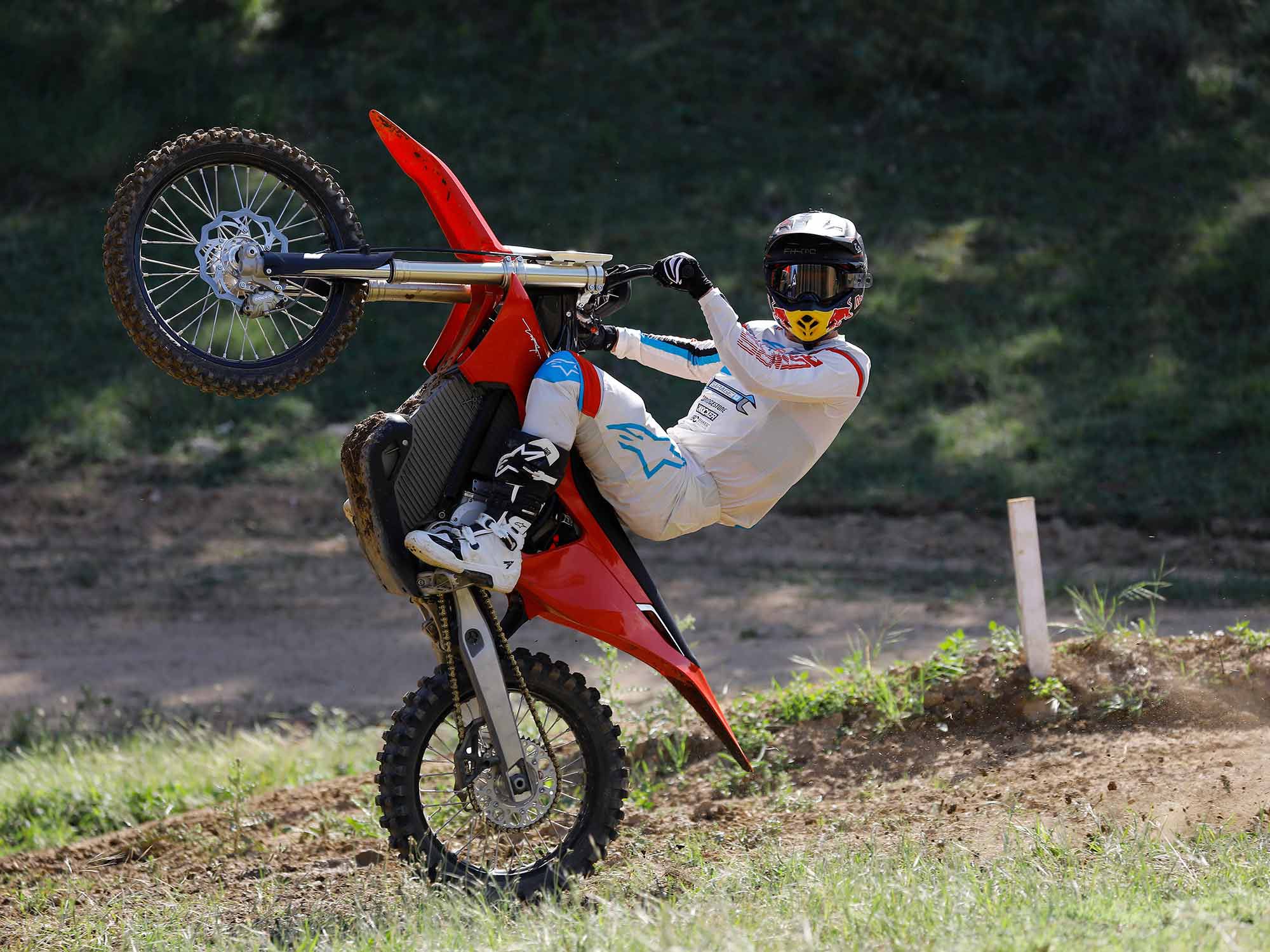 Wheelies… It can literally do them anytime, anywhere at any throttle position. (Stark/)

Whatever your thoughts on the electric future of off-road motorcycling, they now have to contend with reality. The two-wheeled electric motorcycle segment has been growing over the last decade, but most of the options come with compromises. Now the Stark Varg electric motocross bike has arrived, and the game, supposedly, has changed. As I boarded my flight to Barcelona, Spain, for the Varg’s official introduction, my thoughts were equal parts high expectations and reservations.

My thoughts aren’t normally worth mentioning, necessarily. But for now, my job is to offer the perspective of a mid-level off-road rider. I ride MX and off-road monthly, but I’m not a ranked pro; twisting throttle with the gang and trading stories truckside with the other weekend warriors is where I find myself. I’m also an Alta owner, and a fan of where an EV can take you when a combustion option is not suited. I’m also aware of the EV’s many weaknesses. I’ve kept a close eye on Stark, and suffice it to say, if the Varg delivers the numbers it’s promised, it’d settle a lot of my qualms.

A couple of those qualms were settled right away. From the moment we arrived at the MX Golf facility outside Barcelona and saw the bikes for the first time, it was clear that the design team had not been assembled at random. Attention to detail was obvious in every aspect of the Varg, and the fit and finish of the machines was a cut above anything I’d seen yet in the motocross industry.

Riding the bike was equally striking. After a hundred feet it was obvious that the Varg is a different animal. The throttle is crisp and direct, as electrics are, but also comfortably linear. This, the most immediate sensation, is where most riders will start to feel connected. And the Varg is connected, quite literally. Riders can hear as well as feel the earth break under power, the knobbies finding their groove and turning in on the front tire. It’s truly a different and extremely visceral experience to hear all the sounds of each and every move the motorcycle makes while moving through its environment. Without the roar of a gas engine, the rider feels at one with nature and the motorcycle at the same time.

The track layout was ideal for familiarization with a new platform, sandy at the base but just about perfect after two days of rain. The first few laps around the track were perhaps a little hesitant and Bambi-like over the jumps and rhythm sections; this was not because of the Varg’s performance. Gauging speed on a traditional MX bike is largely based on gear selection and throttle position; naturally the Varg is different. On corner entry and exit the Varg was like a knife, taking any line its rider chose to put it on. At times it felt like it could turnaround backward if necessary. I have never experienced something this responsive in the dirt.

For the suspension components, a KYB fork and shock with more than 12 inches of travel and NiCr-coated legs and shafts were developed in collaboration with Technical Touch. Right away this was a relief: Stark wasn’t wasting its time with any of the available air fork products that have continued to disappoint riders and racers alike.

The integration of the air fork was to reduce the production cost of the unit, which may seem at odds with Stark’s goal of not cutting any corners on the Varg platform. As funny as this sounds, the Stark “cases,” or comes up short, and overjumps like a dream. This is crucially important for most motocross riders; when you are fresh to your session, this is not an issue, but toward the end of a moto it becomes a very important handling characteristic. Stark was able to develop a rear linkage that kept the ship afloat and ready for competition without a lengthy linkage hanging below the skid plate, meaning there’s one less item to catch on the dirt. This will be an amazing design for enduro usage, as the linkage is often the lowest catch point on many large obstacles.

The Stark team was so confident their product would deliver that they brought every current 450, so riders could test them back to back with the Varg in a direct comparison. Of course, all of the new 450s rip. And so did the Varg; this was really the most convincing part of the day. Take, for instance, the excellent GasGas 450, which is a bit more rideable than some of the other high-powered 450s. Excellence notwithstanding, the GasGas instantly felt much heavier to maneuver than the Varg. Any advantages the traditional 450s had over the Varg were due mostly, if not completely, to

Did you miss our previous article…
https://www.mansbrand.com/going-off-track-the-joy-of-road-america/

Barrett-Jackson to Offer Selection of Vehicles from the American Muscle Car Museum Collection at the 2022 Palm Beach Auction, April 7-9

2021 Audi RSQ8 By Mansory Expands Their Lineup To New Customers