Over the past six months, central banks and governments have unlocked financial floodgates to deal with the economic fallout of covid-19. As early as April, 106 countries had introduced or adapted social protection programs, mostly cash transfers, to help those affected by the pandemic. A McKinsey analysis of 54 countries estimates that governments had committed $10 trillion by June, through grants, loans, and furlough payments to unemployment benefits and welfare. The quantities far outstrip the 2008 financial crisis (see chart). 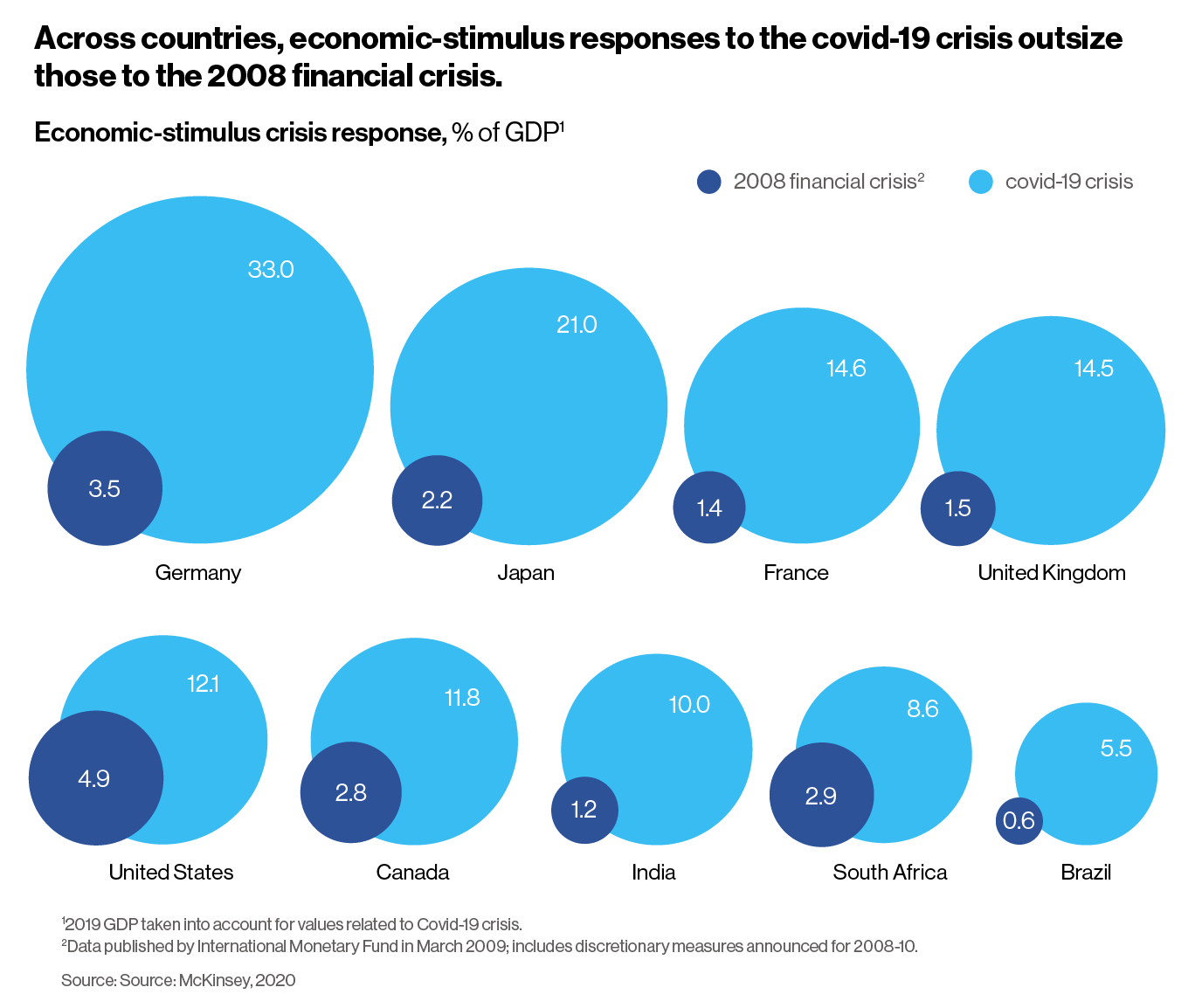 Running parallel to this state spending spree is a full-bodied embrace of digital finance by citizens. Paper cash and coins are potential vectors for the virus (one municipal authority in India even banned the use of paper cash for home deliveries). The movement to online commerce helped millions of consumers grow accustomed to digital spending, and they will not likely return.

Some forward-looking governments and central banks are combining the two, by using digital technology to disburse funds, to leverage the speed and efficiency as well as to unlock more data about the shape of the economic recovery. Experimental policymakers are using this once-in-a-generation cash infusion to reimagine how governments make payments to citizens.

In Hangzhou, China, municipal authorities are working with Alibaba, headquartered there, to launch a digital-coupon stimulus program via the Alipay platform. Coupon-based recovery initiatives are not new—the city used a paper scheme during the 2008 crisis—but releasing them digitally, in a real-time lottery, allows the government to analyze how coupons are spent, unearthing data about the economic recovery. Unlike paper, digital coupons are flexible; the number, value, and thresholds at which they are used are adjustable over time, allowing authorities to shift them to sectors most in need. The program has been replicated in more than 100 cities across China.

China was already a frontrunner in digital finance. The digital yuan is on track to be the world’s first sovereign digital currency and is currently in pilot mode with four state-owned commercial banks. But many other countries are funneling stimulus funds through digital pipes. Malaysia’s federal government disbursed $110 million to almost half the population via three e-wallets—Grab, Boost,

Did you miss our previous article…
https://www.mansbrand.com/in-defense-of-california/

Uyghurs outside China are traumatized. Now they’re starting to talk about it