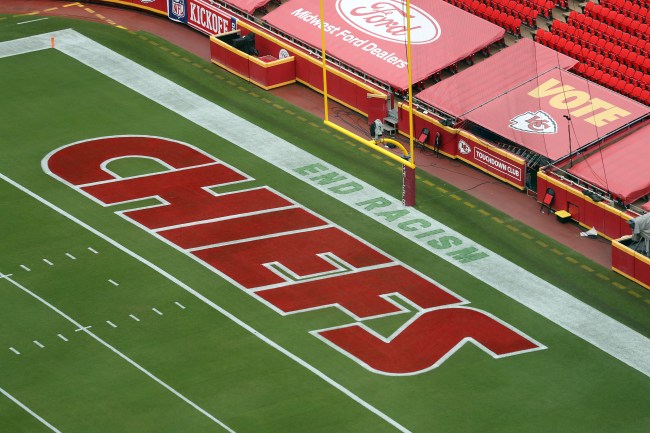 Before the Texans and Chiefs took the field on Thursday night, NFL commissioner Roger Goodell announced the league was going to put social justice messages on the backline of all end zones in an effort to show unity in combating racism.

“The NFL stands with the black community, the players, clubs, and fans confronting systemic racism. We will not relent in our work,”

Both end zones in Arrowhead Stadium on Thursday had two different messages in the back of the end zone. One end zone backline says “End Racism” and the other says “It Takes All Of Us.”

Despite the NFL’s best efforts, no one seemed happy with the endzone messages and fans went on to mock them on Twitter.

They did it guys. The NFL figured out how to “end racism.” Amazing. https://t.co/q7OlRgO0n6

“End Racism” in small poorly visible letters right above the giant Native American team name is very on brand for both the NFL and our society as a whole https://t.co/5yKB4b51Pj

End racism by ending race-based mascots & dehumanizing ‘tomahawk chops’ & chants that have no basis in reality. This is surface bullsh*t that amounts to nothing. #NotYourMascot https://t.co/3oCm4g5eXl

Only @NFL could not realize the cruel irony of putting “END RACISM” behind an end zone of a franchise that dehumanizes Native Americans with their name, logo, theme and racist Tomahawk Chop. https://t.co/MpLbjEA9Ob

How to Make a DIY Compass

How to Deal With a Bad Haircut

Why You Shouldn’t Make Your Own Bed