Over the past four days, during the second half of the Monterey Car Week, Weathertech Raceway Laguna Seca played host to a special four day event celebrating some of the greatest, some of the most influential, and some of the most important cars in motorsports history. And unlike a Concours d’Elegance or a parade lap, these cars came to Monterey for one reason alone:

To be driven. Properly driven. Where they belong, on the track.

Day one of the four day Monterey Motorsports Reunion event, or simply the Monterey Reunion, saw everything from 1950’s GT and LeMans cars to late 1990s touring cars roar around the race track. If you missed the live stream of the event, you can watch it here: Monterey Reunion Day One. Do plan out your time though, as the whole stream is 8 full hours of history.

For our highlights of day one, as it was mostly just a show-and-go day so that the drivers of all the amazing classic cars could get used to the circuit for the weekend races, we are going to focus in on some of the most special, rare, and game-changing race cars that graced the tarmac at Laguna Seca with their tires. 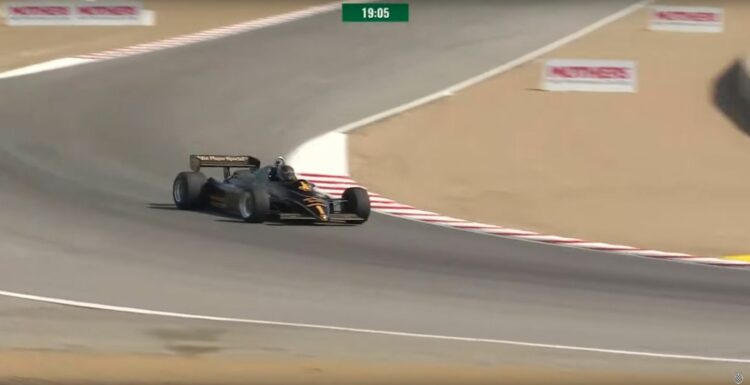 Lotus was a dominant force in the mid-to-late 1970s, with Colin Chapman designing machinery that used aerodynamics to the fullest of engineering understanding at the time. It was Lotus that introduced the first ground effects car, the 1977 and 1978 Lotus 78, which is returning next year in the 2022 Formula 1 World Championship as the primary way the cars will generate downforce. However, between 1979 and 1981, the pursuit of pushing the envelope with newer designs and some out-there ideas led to Lotus race cars becoming uncompetitive and unreliable.

In 1982, however, with Chapman designing and Peter Warr running the team, the 91/8 Cosworth was one of the most revolutionary cars of Formula 1, full stop. The early 1980s was when carbon fiber was still a new, unexplored, underdeveloped material, which only one of the richest teams, McLaren, investing heavily in. That lead to the light, but only moderately competitive 1981 McLaren MP4/1, the first car to use the now-standard carbon fiber monocoque design. Where Chapman took the idea and ran with it was by shaping the carbon fiber monocoque and body shell to coax the air into producing massive downforce in an ingenious way. Not over the gigantic rear wing, which you will note is almost completely flat, nor the front wing, again almost completely flat.

The 91/8 Cosworth used a ground effect underbody comprising of two large venturi tunnels, while the body overtop was made as thin in profile as possible, and scooped a layer of air up from the start of the venturi tunnel to pass through radiators and then join the cool air flowing over the side pods of the car. In effect, Chapman designed a system whereby rammed air, just as it was starting to compress through the venturi tunnels, was skimmed and held under a layer of air moving over top of the sidepods. This created a thin layer of high-pressure air, which when it passed over the tail end of the car, thrust it down into the track. This was aided by the rapidly expanding compressed air through the venturi tunnels created a low-pressure zone that sucked the car hard down to track.

It was the second-ever Formula 1 car to use a full carbon fiber monocoque chassis, and one of the last to use the legendary Ford Cosworth DFV V8, the winningest engine in all of Formula 1 history. But it was revolutionary because it was, and to this day still is, one of the hardest

Did you miss our previous article…
https://www.mansbrand.com/russo-and-steele-automotive-auction-offers-three-coveted-corvettes/

ELEGANCE DEFINED: This Award-Winning 1962 Corvette Turns Heads On and Off The Show Circuit