Jack London’s Wisdom on Living a Life of Thumos

With our archives now 3,500+ articles deep, we’ve decided to republish a classic piece each Sunday to help our newer readers discover some of the best, evergreen gems from the past. This article was originally published in December 2017.

The philosopher Plato thought that the soul of man could be compared to a chariot and consisted of three parts: a dark horse which represented the appetites, a white horse that represented thumos, and the charioteer which symbolized reason, and worked to keep the two disparate steeds in balance.

Of the three parts of the soul, thumos is the hardest for us moderns to grasp. The ancient Greeks thought it essential to andreia, or manliness, but there’s no one word in contemporary language that is a real match for it. Even for the Greeks, it was a multi-faceted force that they saw as the “seat of life.” Thumos was the source of emotion — particularly a righteous anger that manifested itself not only towards one’s enemies, but also at oneself for failing to live up to one’s own principles and code of honor. Thumos was the juice to action and the energy of drive — particularly that which led a man to fight, preserve his honor, become the best of the best, and leave a legacy. It was also the location of a man’s philosophical code — a matrix of discernment through which he pondered possibilities and intuited decisions. Thumos was a man’s spiritedness, his fire in the belly.

Though thumos is a little difficult to understand in the abstract, it’s easy to recognize when embodied, and no one in modern times embodied it more than Jack London.

Known to his friends as “the wolf,” London would always remind them that “we are dying, cell by cell, every minute of our lives.” He was thus determined to make the most of every day he was given. London took pride in “the captaincy of his own powers,” and subscribed to the maxim that “Satisfaction with existing things is damnation.” He referred to the journey of life as his “adventure path,” and he was ever in pursuit of “the tang of living.”

Thus as a young man, London worked in a cannery, electrical plant, and laundry facility, taught himself to sail, became an oyster pirate, traveled the Pacific aboard a seal-hunting schooner, and ventured into the Klondike in search of gold. By age 22, he had seen and done more than 99% of men will in their entire lifetime.

London also read voraciously, immersed himself in a thorough autodidactic education, taught himself how to write, and became a bestselling author — writing classics like TheCall of the Wild and White Fang, alongside 20 other books, 200 short stories, and 400 non-fiction pieces.

London joyed in both the physicality of his body and the sharpness of his mind; as The San Francisco Examiner put it, he had “a prizefighter’s jaw and philosopher’s forehead” — the “instincts of a caveman and aspirations of a poet.” His wife called him an “extraordinary entity both as Doer and Thinker.”

London never stopped seeking “the primordial vigor of life.” And given that his credo declared that he’d “rather be ashes than dust,” he unsurprisingly burned out like a flaming comet and died an early death. Yet while he never got sufficient hold of his “dark horse” and flogged the white one too hard, the unadulterated intensity of his thumos can be a great inspiration to modern men, who are often stuck in a deep malaise and access their own thumos far, far too little.

We’ve previously offered a series that details the way London’s life embodied the force of thumos, and I really recommend giving it a read. Today, we let London describe his forceful spiritedness in his own words. Below you’ll find a collection of Jack London’s quotes that each touch on a different aspect of thumos. Read a few when you’re feeling restless and sick of drifting through life; they’ll give you a kick in the pants, and a fire in the belly. 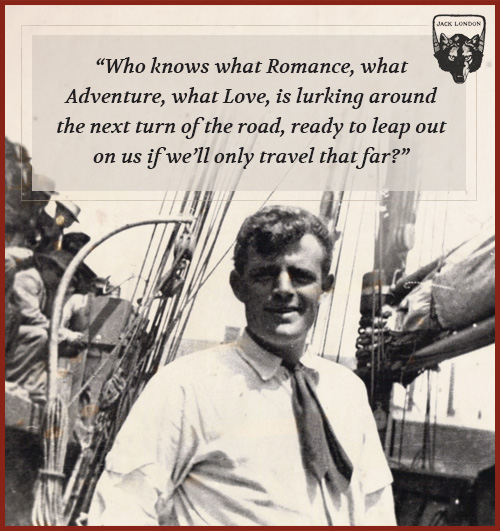 Podcast #475: How to Lose Weight, and Keep It Off Forever