Is the Necktie Obsolete? 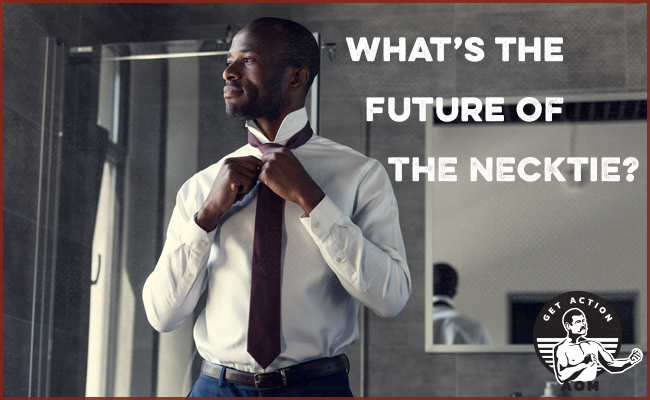 Men’s magazine writers and cultural observers have been predicting the demise of the necktie for nearly a century now. Way back in 1921, the Associated Press reported: “Neckties Doomed.” Flip through archival issues of Esquire, and you’ll find at least one article in each decade of the 20th century prophesying the death of this sartorial accessory.

But these obituaries were premature; the necktie kept on beating the odds.

In fact, sales of ties increased in the late 2000s and early ‘10s. For a while there, the tie wasn’t just surviving — it was thriving.

Then, the pandemic happened. The world shut down. Men started working from home. Instead of putting on a dress shirt and tie, they could put on a t-shirt and hoodie. If they needed to appear presentable for a Zoom meeting, they’d throw on a dress shirt, with naked, unadorned collar, and call it good.

Most in-person events were canceled too. Goodbye to nice dinners. Goodbye to swanky weddings.

As the work-from-home, recreate-from-home era dawned, comfort and informality took the field, while formality and dressed-up style were temporarily sidelined.

I say “temporarily” because I think there was, at least at first, an unspoken assumption that once the gears of “normal” life fully started up again, the tie would make a comeback. After all, that’s just what you’re supposed to wear when you work at a respectable office or show up to a classy shindig.

But will the necktie really make a return? Or has the pandemic accelerated an already extant trend towards sartorial informality, making men increasingly intolerant of any get-ups that don’t allow for an elasticized waistband and putting the necktie, at long last, on its final silky legs?

I reached out to six menswear writers to get their takes. Here’s what they had to say as to what the future of the necktie holds.

Tanner Guzy is a men’s style coach and the author of The Appearance of Power: How Masculinity Is Expressed Through Aesthetics

“Five years ago I would’ve told you it would take a major cultural revolution to fully and effectively kill off the tie — the kind of revolution that really only comes with war or major regime changes. But now that we’ve been through COVID and seen most white-collar environments — the only ones that still really require a tie — move to remote work and a more casual aesthetic, I think we’re nearing the end of its ubiquity.

Which isn’t to say we won’t still see men wearing ties — there will be certain professions or scenarios in which it will still be both appropriate and expected — lawyers in a courtroom, politicians giving speeches, etc. But, just like we saw the tie and collared shirt stop being standard in the blue-collar world, I project we’re near the end of it being a normal part of white-collar environments as well.”

David Coggins is the author of several books, including Men and Style, and regularly writes about culture and menswear in his newsletter The Contender

“​​For a relatively small piece of fabric, the tie receives a lot of attention. That’s because it’s the easiest barometer of formality. If an event requires a tie then that tells you something. As we know, there are fewer and fewer places that ask for a tie. I think that will mean that the people who wear them will wear them by choice, not by default. So a tie, and a suit for that matter, will not indicate a depressed middle manager, but a more dynamic sense of expression. At least that’s my hope anyway. I still hold out hope for a few bands of well-dressed iconoclasts.”

“For the first two weeks of August I watched coverage of the Olympics on the CBC, Canada’s national broadcaster. One of the two anchors was a well-dressed guy called Andrew Chang, who is also one of the anchors of the national nightly TV news. Throughout the coverage he wore an elegant, tailored three-piece suit, shiny shoes, and cufflinks.

This struck me as obviously incongruent: the suit — especially the suit with a waistcoat — called out for a tie. It looked as if he had simply rushed out before finishing dressing. I could see maybe a sports jacket with no tie, or a casual, less constructed suit, with maybe suede shoes, and no

How to Write a Love Letter

Podcast #636: Why You Overeat and What to Do About It