The Ingenuity Mars Helicopter is providing scientists a look at what is on the road ahead for the Perseverance rover. And acting as a scout, Ingenuity can tell the team what places to avoid, too.

There’s an interesting rocky outcrop that the rover team would like to investigate, but it might be too risky for the rover to navigate the tricky terrain. Instead, Ingenuity flew over the area of geologic interest on April 23, and as requested from Perseverance’s science team, took pictures to provide a closer look. This was Ingenity’s 27th flight on Mars.

“Ingenuity not only provides imagery from an aerial perspective, but allows our team to be two places at once on Mars,” said Ken Farley of Caltech, Perseverance’s project scientist. “Sending the rover to survey and prospect in one location while launching the helicopter to survey another hundreds of meters away is a great time-saver. It can also help us explore areas the rover will never visit, as in this case.” 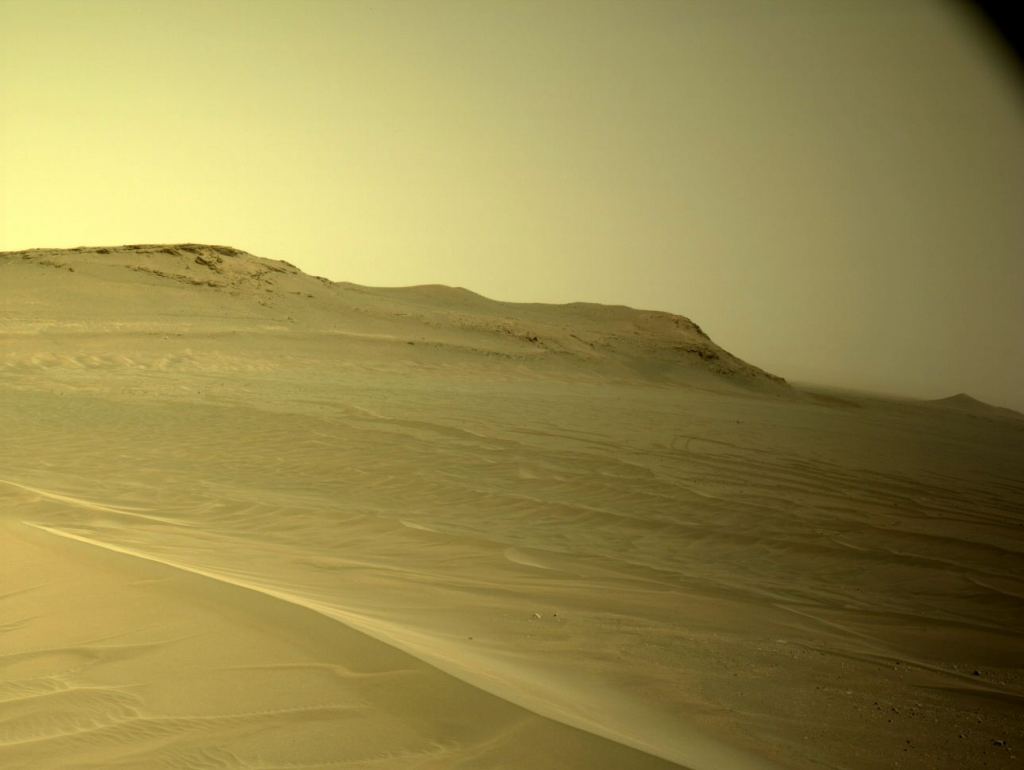 A raw image from Perseverance’s Navigation camera on May 3, 2022. Credit: NASA/JPL-Caltech.

The rocky ridge, which the science team calls “Fortun Ridge” (named after a parish in Norway), is a geologic feature of interest because data collected from orbit, and at a distance by Perseverance, indicates it is the boundary between the two major rock units on the crater floor.

Previous images suggest tilted layers of rock in this area of Mars are uncommon, unlike on Earth, where plate tectonics and earthquakes cause tilting. There was another area of tilted rock in a similar ridgeline that both Ingenuity and Perseverance studied earlier in the mission, called Artuby in the South Séítah region. Now, the science team will have an opportunity to compare the two regions. This Mastcam-Z image of a portion of the Artuby ridgeline shows large (meter-scale) boulders. Credits: NASA/JPL-Caltech/ASU.

The team said comparing Ingenuity’s shots of the two angled ridgelines may help team scientists better understand the history of the crater floor and, possibly, the forces that were at play in this part of Jezero Crater billions of years ago.

With this many flights under its belt, Ingenuity can turn into a science-based machine instead of just doing test flights. Ingenuity has proven aerial flight works on Mars. The new science-oriented flights allowed engineers to take a closer look at the backshell and parachute that helped the Perseverance rover safely land on Mars (with Ingenuity tucked away underneath). The team said those images have the potential to help ensure safer landings for future spacecraft such as the Mars Sample Return Lander, which is part of a multimission campaign that would bring Perseverance’s samples of Martian rocks, atmosphere, and sediment
Did you miss our previous article…
https://www.mansbrand.com/a-space-telescope-could-reveal-a-black-holes-photon-ring/

ESA’s ARIEL Mission Will Study the Atmospheres of More Than 1,000 Exoplanets

10 Tips for Recovering from a Hard Hike or Mountain Climb