How to Tell Awesome Stories to Your Kids 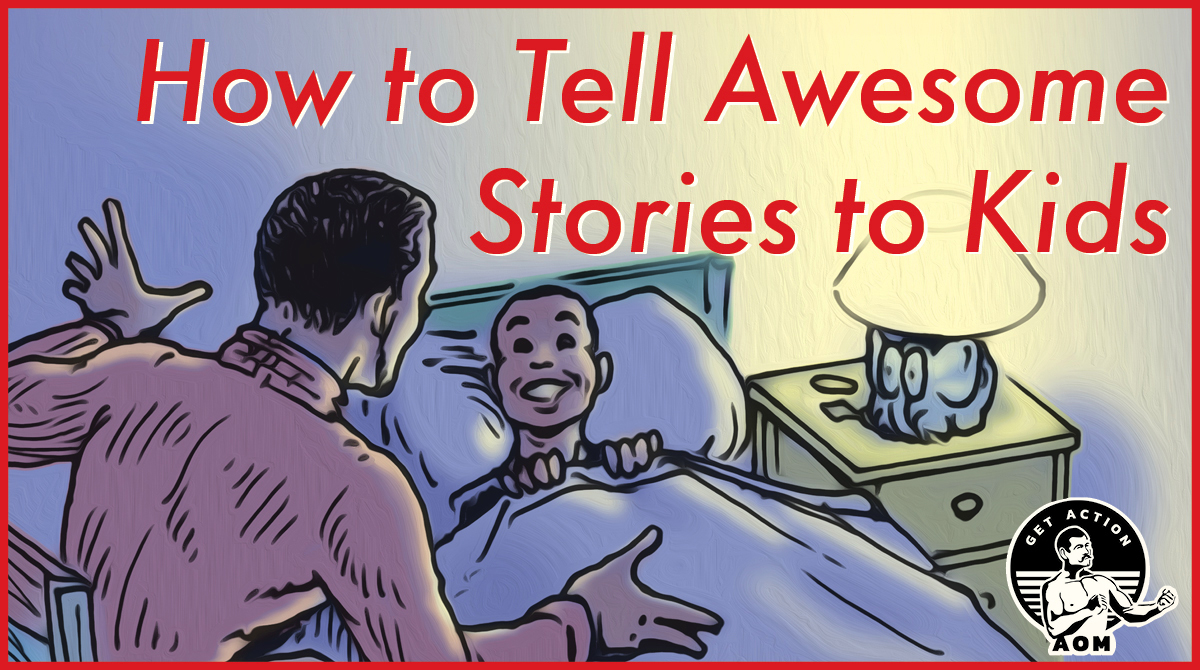 Since our kids were little, we’ve read to them every night before bed. Sometimes after we put the book we’re currently reading aside, I’ll also give them a bonus, impromptu storytelling session as I tuck them in. I just tell them a story that I conjure up on the spot. While Gus (age 10) has kind of aged out of it, Scout (age 7) still really enjoys hearing Dad’s imaginative yarns.

I didn’t use any guides to come up with my stories, and instead just drew upon my years of consuming narratives in books, comics, TV, and movies to figure out what to say and how to (lightly) structure things.

On the recommendation of an AoM reader, however, I recently picked up a short book called How to Tell Stories to Children, co-written by two Waldorf and forest school educators. Looking to hone my paternal storytelling skills, I gave it a read. I was pleasantly surprised to learn that I was already using many proven tactics on crafting stories for kids on the fly, and I garnered a few new tips too.

If you’re a dad (or cool uncle or even grandpa) looking to connect with your kiddos via storytelling, below I share the nuts and bolts of crafting stories for children that I’ve personally field-tested and found work well.

In How to Tell Stories to Children, authors Silke Rose West and Joseph Sarosy say the best stories for children are structured in the form of a loop. The story starts off in reality, in the world your kid lives in; then it moves into a world of imagination where reality and fantasy mix together to create a new world, and a conflict must be resolved; then it ends up back in reality.

I’ve been unwittingly following this pattern since I first started telling stories to my kids.

A series of stories I’ve been telling my daughter Scout for the past few years is called “Magic Mirror Land.” I basically ripped off the story of Alice in Through the Looking Glass and The Lion, the Witch, and the Wardrobe and made Scout the hero of the story.

She walks through the big mirror that’s in the hallway outside her bedroom door (reality). She enters a world where everything is kooky (fantasy). She’s a chicken, her brother is an elf, her parents are a dog and a cat, the sky is pink, and the sun is a lemon. In Magic Mirror Land, Scout fights all sorts of monsters to save her Magic Mirror Family. But she always makes it back to her bed before sunrise (reality). Real world→imaginative world→real world.

I’ve got similar stories like this. During Christmas time, I tell a story that the kids have a tunnel in the back of their closet that takes them to the North Pole. Before freezing to death, they get picked up by an elf and placed in a cozy bed in Santa’s house. They have a great time with Mr. and Mrs. Claus sipping hot chocolate, eating cookies, and playing with toys. At the end of the story, they get brought back to their home via sleigh. Real world→imaginative world→real world.

The set-up doesn’t even have to be that whimsical. If you saw a squirrel in your backyard earlier, you can make up a story about what its day is like and the problems it has to solve — avoiding fights with birds, not getting run over by a car, collecting enough

Sunday Firesides, Distraction Expands in Order to Fill the Void

The 2022 Enrollment Period for The Strenuous Living Is Now Open

How to Turn a Plastic Jug Into a Lantern