How to Make the Perfect Over-Hard Fried Egg

There are a bunch of different ways to cook eggs: hard-boiled, poached, scrambled . . . heck, you can even make them in the microwave.

When it comes to making an egg sandwich or putting an egg on a burger (and a burger should seldom be without one) there’s no question as to which method is best: fried. All the way.

You can fry an egg over-easy, over-medium, or over-hard, depending on how runny you like the yolks. Folks who don’t like any runniness like their eggs cooked in the latter style. The yolk of an over-hard egg is cooked all the way through, similar to what you’d find in a hard-boiled egg.

If you fry the egg low and slow, the whites never garner that bit of crispiness that makes for a tasty fried egg; instead, the egg turns out soft and limp. It also takes forever to cook — like 6-8 minutes.

If you turn up the heat to at least medium to speed things along and get some of that desired crispiness, then the egg burns before the yolk cooks through, for an obvious reason: the white is a lot thinner than the yolk.

The below method solves these issues, and produces an over-hard fried egg quickly and with the perfect consistency.

Step 1: Grease a non-stick pan with cooking spray and warm to medium heat.

Yes, things like butter or bacon grease add flavor, but nothing turns out easy-flippin’, shape-maintaining eggs better than a shot of Pam.

Step 2: Crack an egg (or two) into the pan and season with salt and pepper.

Step 4: Uncover, flip the eggs over, and recover with lid. Fry for around another minute.

Use your spatula to make a small puncture in the yolk and see if it’s cooked through. If it’s not, replace the pan’s lid, turn the burner off, and let the eggs sit for 30-60 seconds. You can actually leave the eggs under the lid and walk away for awhile. They’ll stay warm without becoming overcooked — you do like them over-hard, after all! 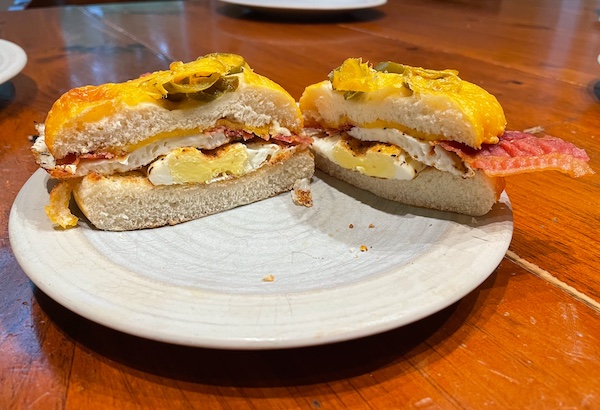 Podcast #773: Get on Top of Collaboration Overload

How to Do the Perfect Pull-Up