How Every Man Should Learn About Having a Heart Attack 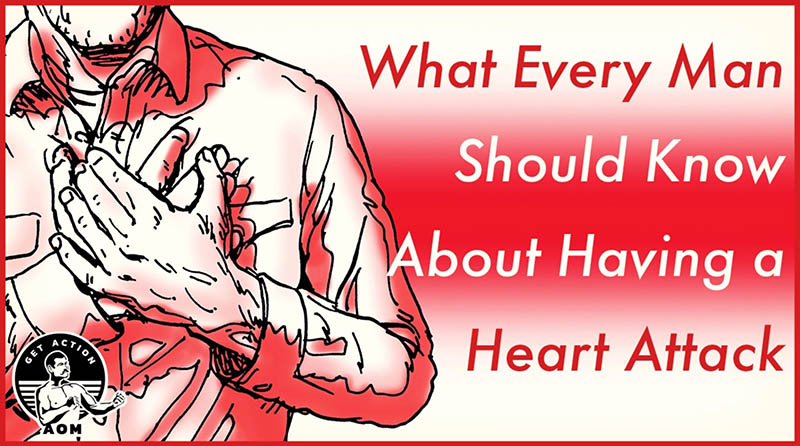 With our archives now 3,500+ articles deep, we’ve decided to republish a classic piece each Sunday to help our newer readers discover some of the best, evergreen gems from the past. This article was originally published in August 2019.

Editor’s Note: This is a guest article by Marine Corps veteran and paramedic Charles Patterson.

Imagine this scenario: you’re in line at an airport ticket counter getting ready to leave for a well-earned vacation with your wife. The kids are safe and sound with your parents, you made sure the stove was off before you left the house, and you even remembered your toothbrush. Then the man in front of you — who’s been arguing with the ticket agent about the weight of his luggage — suddenly grips his chest, cries out in pain, drops his carry-on, and falls to his hands and knees. His wife screams and frantically starts shouting, “Bill?! Bill! What’s wrong?! Bill!” The man rolls over to a sitting position against the ticket counter and you notice his face has gone pale and he looks scared. While you’re watching, he stops responding to his wife and slumps over.

What just happened? Your wife looks at you with a Do something! expression and indeed you want to do something, but you don’t even know what happened, let alone what to do. You hear somebody yell, “Call 911!” and you fumble for your phone, unsure of what to even say if you do call.

Bill just suffered a heart attack. His years of overeating, infrequent physical activity, refusal to take his blood pressure medicine, and the on and off chest pain he’d been ignoring the last few months culminated in a singular episode that may have just killed him.

The characters and the settings change, and the causes and results vary, but a scene similar to this plays out in people’s hearts many times a day, every single day, all over the world.

Every year in America nearly 800,000 people have a heart attack — and the majority of them are men. Heart attacks most commonly occur in patients with some form of heart disease. Heart disease (a term encompassing several conditions) is one of the leading causes of death in the United States, with more than 600,000 deaths per year, and most of these are a result of heart attacks and strokes.

With statistics like these, it is very likely that you or someone you know has been or will be affected by a heart attack. A heart attack may result in sudden cardiac arrest, where the heart stops beating, but most heart attacks are survivable. The good news is that with a little education you can recognize the signs, symptoms, and risk factors of a heart attack, as well as what to do if you, or someone around you, has one.

The Physiology of a Heart Attack

While there are a few ways that a heart attack can occur, the majority happen as a result of a clot formation in the coronary arteries. Heart attack patients typically have some form of coronary artery disease, commonly atherosclerosis, which is the buildup of plaque along the walls of the coronary arteries. These plaque deposits can rupture or break off under high pressure. When they do rupture, the blood is exposed to the plaque’s necrotic core, which causes a clot formation. As this clot grows and blocks the vessel, blood flow to the rest of the heart is reduced and can eventually stop. As a result, oxygen cannot get to the rest of the heart and the tissue begins to die.

Tissue that is becoming starved for oxygen is called ischemic tissue. In the heart, this is called cardiac ischemia. If the tissue goes too long without oxygen, it becomes permanently damaged and is said to be infarcted. This permanent tissue death of the heart muscle is a myocardial infarction — which literally means “death of heart muscle.”

When part of the heart muscle becomes damaged or dies, the heart’s ability to pump blood is reduced. Imagine suffering a permanent injury to your arm that prevents you from doing as many bicep curls as you could before. How badly the heart muscle is damaged depends on a variety of factors, including where the clot formed in the coronary arteries and how long the patient goes without treatment.

While many heart attacks are not fatal, the damage that they cause has lasting effects that

Podcast #718: How to Use Digital Body Language to Build Trust and Connection

What It Took to Ride the Pan-American Highway: 30,000 Miles on a Motorcycle

How to Test if a Plant Is Edible