House-flipping algorithms are coming to your neighborhood

>For years, Michael Maxson spent more nights in hotels than his own bed, working on speaker systems for the titans of heavy rock on global tours. When Maxson decided to settle down with his wife and their two dogs, they chose the city where stadium rock spectacles took him more often than any other: Las Vegas.

After renting for several years, in 2021 he found a home he wanted to buy in Clark County—a place within easy reach of Vegas’s headline venues yet also quiet, an airy single-­story stucco house on Dancing Avenue, which backs onto a 2,000-acre park. He dreamed of waking up each morning to look out across lakes and parkland. “It was a beautiful home,” says Maxson. “I mean, the fact you could see the mountains and the sun set and rise. Man.”

But Maxson’s house hunt was unexpectedly chaotic. House prices in Las Vegas leaped up 25% that year, and the market was awash with cheap mortgages and wolfish investors.

His dream home was not owned by a person but by a tech company. Zillow, the US’s largest real estate listings site, had begun buying up homes in 2018, predicting it could create a “one-click nirvana” for purchasing real estate. It estimated returns of $20 billion a year. Zillow Offers, its “instant buying” business, followed startups like Opendoor and Offerpad, which had pioneered “iBuying,” the so-called “high-tech flipping” model, which uses data systems to price houses and investor cash to buy them before fixing them up and selling them.

In 2021, iBuyers’ purchases jumped to double prepandemic levels, accounting for tens of billions of dollars in home sales. Las Vegas was among the top 10 markets where startups concentrated their investments. In a feverish summer, Maxson had already been outmuscled on two bids by cash offers from Zillow and Opendoor. On Dancing Ave., Zillow now acted as seller, having listed the home on June 24 for $470,000, nearly $60,000 more than it had paid less than two weeks before. But Maxson wanted it and agreed to close at just under asking price. 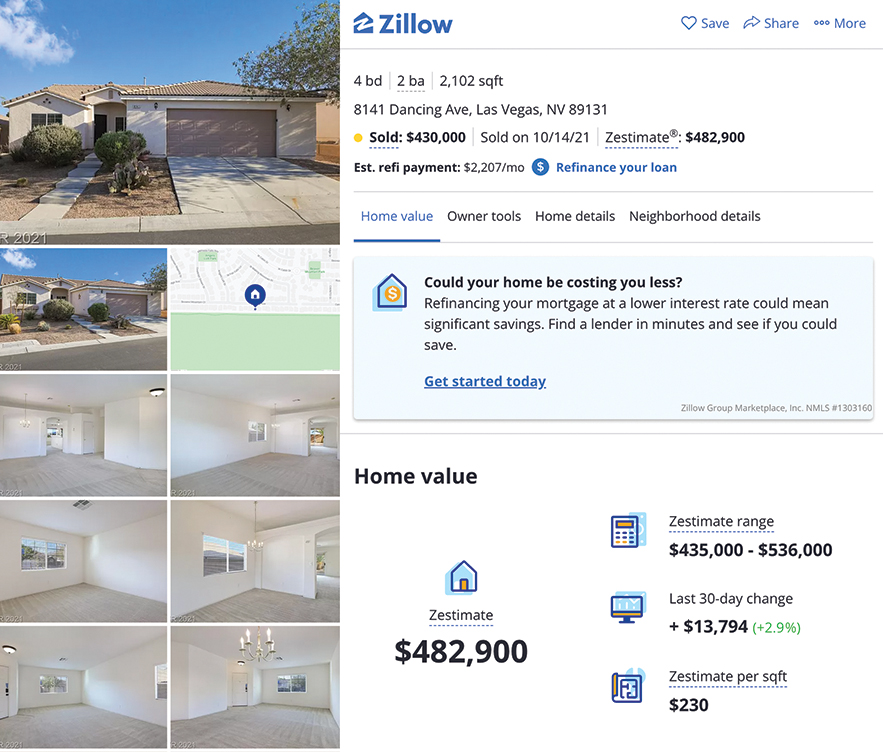 A Zillow listing for Maxson’s dream home on Dancing Avenue.

When he went to take a look at the property, however, he discovered a 37,000-gallon water leak that had eroded garden walls and flooded the neighbors’ yard. Seattle-based Zillow, which owned the home, was oblivious, but the city authorities weren’t—Maxson found a notice stuck to the garage door, threatening a fine for allowing green water to pool, attracting mosquitos carrying West Nile virus. This is one downside of having homes owned by “faceless” corporations, says Maxson: “The [owners] were disconnected from it, because it’s just a number on a spreadsheet.” Though he offered to handle the estimated $30,000 of repairs himself, and take it off Zillow’s books for $30,000 less than the list price, they said no. Maxson discovered soon after that the house had sold to another family, at the same price he had offeredHe estimates that he lost about $2,000 on inspections and other costs—the closest he came to securing a home in 22 attempts that summer.

But at the very same time, the startup that had profited from his dream home was discovering cracks in its own foundation. As it turned out, Zillow Offers had lost more than $420 million in three months of erratic house buying and unprofitable sales. As Zillow Offers shut down, analysts questioned whether other iBuyers were at risk or whether the entire tech-driven model is even viable. For the rest of us—neighbors, renters, or prospective buyers—the bigger question remains: Does the arrival of Silicon Valley tech point to a better future for housing or an industry disruption to fear?

By summer 2021, the US housing market had almost run out of records to break. The Washington Post reported house prices at all-time highs (with a median of $386,000 in June) as the number of homes listed hit record lows (1.38 million nationwide). The average home sold in 15 days that summer—half the time taken a year earlier—as cash-rich investors and second-home buyers bought more than ever before. By November, a New York Times headline asked: “Will Real Estate Ever Be Normal Again?”

Despite making just under 2% of home purchases nationwide during this period, iBuyers began to play a larger, and more unpredictable, role than most, leading to calls from city leaders in Los Angeles

Did you miss our previous article…
https://www.mansbrand.com/aussie-crypto-exchange-coinjar-rolls-our-improved-platform-design/

Our favorite photographs from 2021

The Download: A US oil-drilling hotspot is kicking out far more methane than we thought