Everything You Need to Know About Concussions 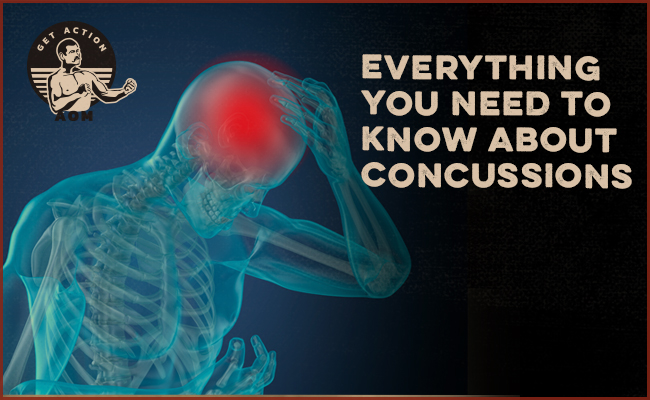 Editor’s Note: This is a guest article by Marine Corps veteran and paramedic Charles Patterson.

If you watch enough football (or follow sports at all), you’ve assuredly heard about players suffering a concussion or multiple concussions, resulting in their leaving a game, skipping a season, or even retiring permanently. Athletics may be the most publicized cause of this injury, but concussions occur frequently in the general public too, especially among children and the elderly.

A concussion is one of many types of traumatic brain injuries (TBI) and is often referred to as a mild traumatic brain injury (mTBI). It’s also the most common form of TBI. The consequences of a concussion can be minor, resolving within minutes to days, or more serious, causing a disruption in normal life and taking several weeks or longer to abate.

While a concussion may be referred to as a mild TBI, there is nothing mild about this kind of injury. It is mild only as it relates to more serious forms of TBIs. Even a singular first-time concussion with seemingly transient symptoms should be taken seriously.

As such, today I’ll walk you through how concussions happen, what they “look” like, and how they should be treated, so that you’re better prepared to take care of yourself and others in the face of an injury to this most essential part of the body.

What Exactly IS a Concussion?

To understand the nature of concussions, you first need to understand a bit about brain anatomy.

The brain is encased in the skull, which, some may be surprised to learn, is not a perfectly smooth structure. Instead, the internal surface is etched with valleys, ridges, and pockets of bone throughout. These grooves and inner structures support the brain and blood vessels and many other structures that make everything north of our necks work how they should.

The brain itself is a soft structure, with a consistency that many who’ve felt it firsthand have described as similar to Jell-O. (Check out this video for a great display of what a brain looks like fresh from autopsy; warning: not for those with a weak stomach!) As such, the brain is very vulnerable to damage, and the body has certain buffers in place to protect it and the spinal cord: a triple layer of membranes (meninges) and cerebrospinal fluid (CSF). Under normal conditions, CSF, among other functions, provides buoyancy to the brain and acts as a kind of shock absorber for it.

A concussion changes this healthy stasis, surmounting the brain’s natural protections, and turning the skull’s textured landscape into a tool of trauma.

A concussion can occur as a result of either a contact injury or a force injury (or in some unlucky cases, both). Taking a punch to the face would be a contact injury. Conversely, whiplash or blast injury, where the head is violently shaken without any actual contact with an external object or surface, would be a force injury. When a contact injury or acceleration force is strong enough, the brain tissue will come in direct contact with the interior of the skull, causing damage to blood vessels and neurons. Aside from this direct contact, the brain is stretched and compressed as it moves around, resulting in additional damage and disruptions.

During a traumatic impact, the brain is often damaged in the same area of the head that

How to Read More Books