Engineers are Testing how VIPER can Handle the Gnarliest Lunar Terrain

NASA’s getting ready to send a VIPER to the Moon. Not the popular sports car but a rugged vehicle that can handle whatever the lunar surface can throw at it. The Volatiles Investigating Polar Exploration Rover (VIPER) was put through its paces recently at the Glenn Research Center in Cleveland. The prototype drove up test slopes and clambered over boulders and craters. It also made its way through a simulated quicksand type of soil in a “sink tank”. It passed with flying colors, and showed engineers how it will handle similar conditions on the Moon.

“We wanted to see if the rover is capable of moving forward in an extreme sinkage environment, and how much slower VIPER might drive or how much additional power the rover would use because of tricky soil conditions,” said Mercedes Herreras-Martinez VIPER risk manager and mission systems engineering technical interchange lead at Ames.

VIPER Practices on Earth to Rove the Moon

The point was to test VIPER’s ability to tackle the really gnarly surface conditions it will face. Building the simulated lunar “test track” was a methodical process, following advice from the VIPER science team. The engineering test team carefully selected the soil simulants for the test. They hand-picked rocks and even carefully crafted the shape and size of the craters. The goal: to mimic actual features at the surface of the Moon’s South Pole. Both teams had a wealth of data to draw from as they built VIPER’s obstacle course. 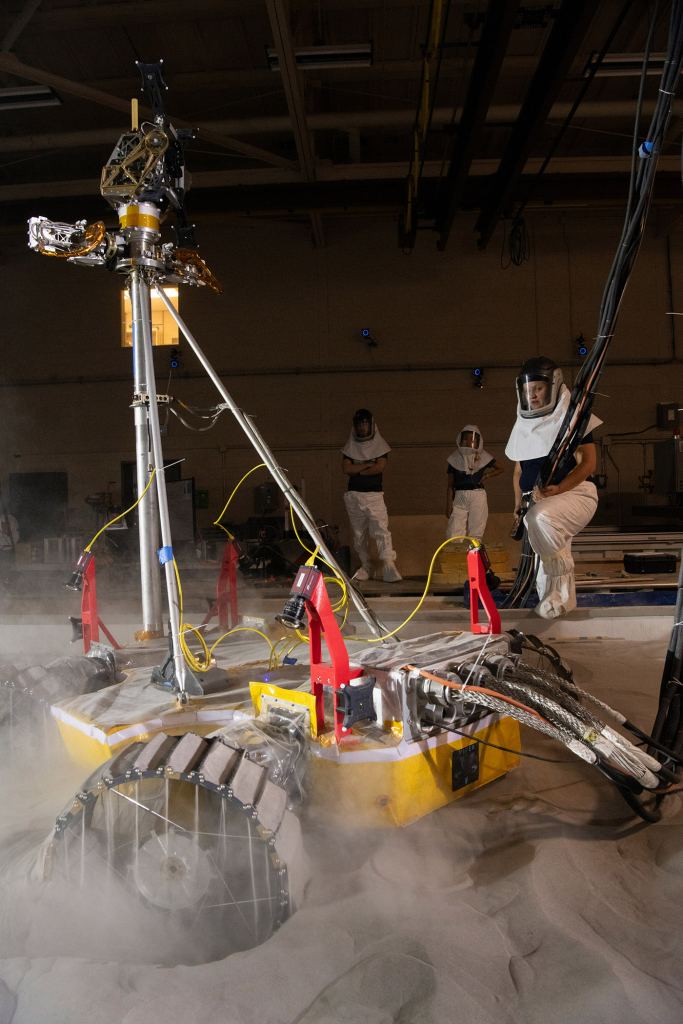 “Using data and imagery from previous lunar missions, we created various randomized scenes to mimic the surface terrain of the Moon, with craters and rocks of different sizes and shapes scattered over the SLOPE tilt bed,” said Kevin May. He is the rover and mission systems engineering intern at Ames who led the terrain preparation for the test. “With help from the VIPER science team, which generated cut-out templates of crater profiles, we were able to form features out of the terrain and shape more accurate craters than ever before. By recreating realistic Moon-like environments, we can get a much better idea of how VIPER will perform on the surface.”

VIPER is basically about the size of a golf cart that will travel up to 20 kilometers at a top speed of 0.72 km/hr. It will carry three spectrometers and a drill for subsurface studies, and get its power from the Sun. It’s expected to last about 100 days or three cycles of lunar day and night.

The hardware bus includes a complex set of controllers called the “Moon Gravitation Representative Unit 3 (MGRU3)”. This is a critical piece of hardware in the rover’s mobility system. It controls the motors that send power to the rover’s four wheels. The tests at Glenn focused on MGRU3’s ability to maneuver through difficult conditions.

“Unlike most car engines, which use a throttle and brake to speed up and slow down all four wheels, VIPER’s motor controllers make the rover wheels turn at the force and rate the drivers want, with extreme precision to allow for better performance,” said Arno Rogg. He is test director and rover systems engineer at NASA’s Ames Research Center in California’s Silicon Valley. “These tests allowed us to verify the performance of the rover mobility system and know it will work well on the Moon.”

VIPER is engineered to withstand temperature extremes that can swing more than 260 degrees Celsius during the day/night cycle. It will be operated by commands from Earth, which
Did you miss our previous article…
https://www.mansbrand.com/scientists-identify-the-source-of-a-famous-meteorite-as-one-crater-on-mars/