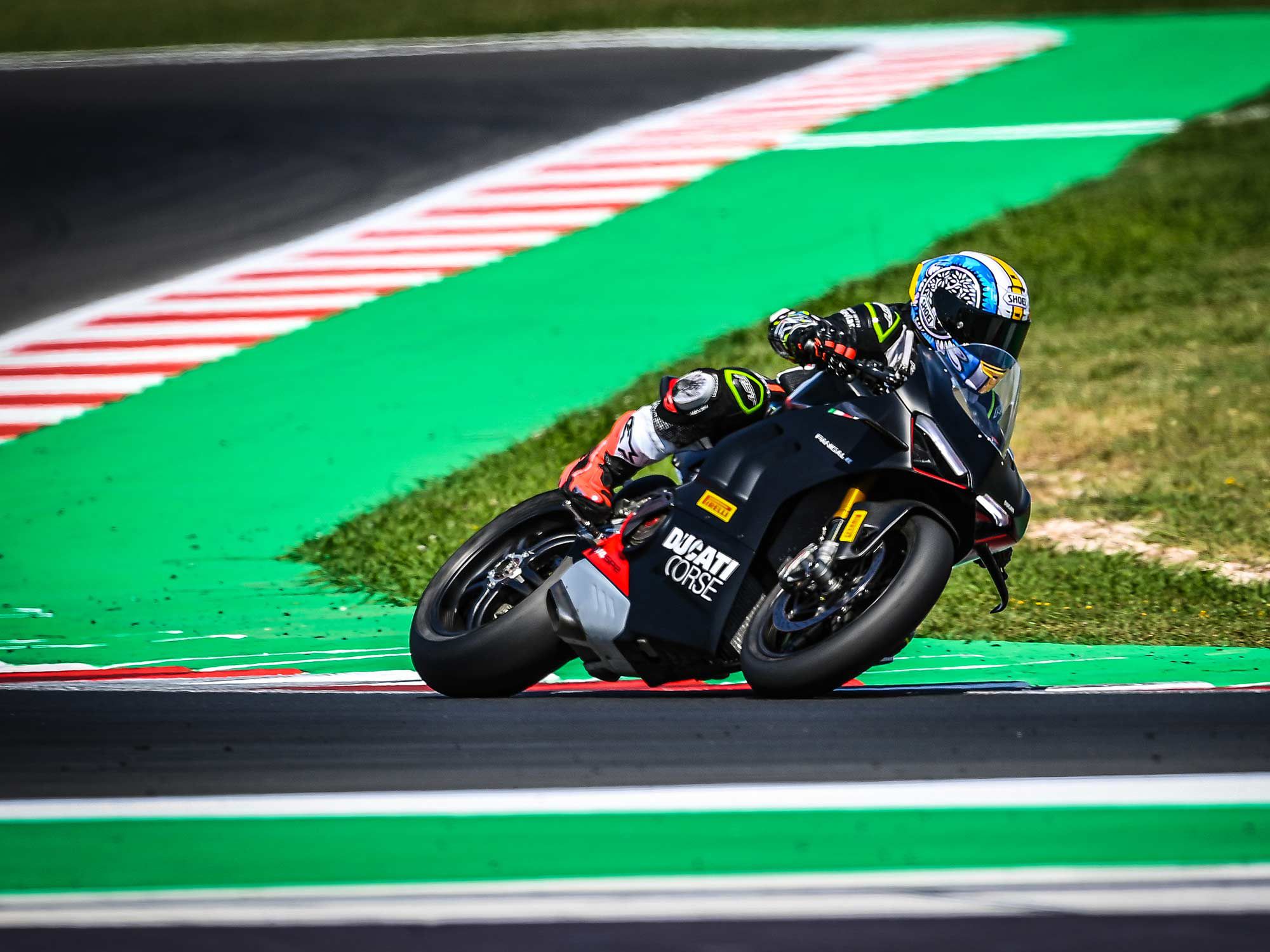 Ducati has always made its SPs truly special. From the 851 through the 916 to the V4 Panigale, they’re the poster bikes for successive generations of the marque’s superbikes. And this updated Panigale V4 SP, the SP2, will make even the coldest, most clinical hearts not only beat faster but lap faster.

Unlike previous SPs, this mid-season update is not about churning out the 500 production units necessary to meet homologation rules for World Superbike. It couldn’t; it runs an ineligible 1,103cc power unit, for starters. This is about bringing the SP into line with the 2022 Panigale V4 and V4 S. Both of these received updates this year that, somewhat bizarrely, meant the cheaper bikes made more power than Ducati’s “ultimate track machine.”

So now the SP2 catches up. There’s a 1.5 hp increase with four riding modes, Street, Sport, Race A, and Race B. There’s an STM-EVO dry slipper clutch that sounds incredible and a lighter 520 chain. There’s an option for a titanium Akrapovič exhaust system that increases power by 12.5 hp while trimming 11 pounds from the SP2′s overall mass. Suspension, too, is aligned with that of the new V4 S, meaning Öhlins Smart EC 2.0 electronic control system with an Öhlins NPX 25/30 fork and TTX 36 shock at the rear.

At 381 pounds (dry), the SP2 weighs the same as the original SP and is just 2.2 pounds lighter than the V4 S. But the ounces shaved are done so in critical areas, with the goal of making a Ducati V-4 that’s even easier to ride blisteringly fast on track. There’s more carbon fiber; the front mudguard, for example, which alongside the older SP’s carbon rims further reduces unsprung mass compared to the V4 S. There’s also a revised tank, and the riding position has been changed for V4 S this year. The aero winglets are redesigned for less drag compared to last year’s SP, and there’s an evocative Winter Test livery to help the SP stand out from the red V4 S crowd.

Ducati gave testers a session on the Misano racetrack on a standard V4 S before swapping them to the SP2. There was no time to warm up, so it was straight into a hot lap. Taking the bike on track in Race B mode seems the best option, basically putting the engine on medium heat, with restricted torque in the lower gears. The engine maps are essentially the same as those on the standard models, and previous experience indicates Race A and full power is a little too aggressive, especially on a scorching day at Misano.

That said, even when this bike is not up to speed and being short-shifted at around 12,000 rpm, well before the redline, it’s still arm-ripping quick. Once again it has demonstrated how it takes a while to recalibrate to riding any Panigale V4, let alone an SP.

After a lap or two to tune in, it’s a tap down on the butter-smooth quickshifter, get the revs singing, and, wow, the SP2 delivers. Now with less unsprung and rotational mass, the SP2 accelerates even faster, so much so that Ducati has been forced to recalibrate the V4′s excellent electronic rider aids. Straight-line speed isn’t a massive jump over the standard, but is noticeable when riding both bikes back to back. Some may have expected more power from the SP2, but unless you’re Danilo Petrucci doing your thing in AMA Superbike, it’s simply not required.

On paper, the separation between the SP2 and the standard V4 S isn’t as significant as the difference between the Streetfighter SP and Streetfighter S, which on track proved to be around two seconds. In back-to-back private testing, Ducati test rider Alessandro Valia was one second faster on the SP, and as the V4 S and the SP2 use the same engine, the difference in lap times is purely down to handling.

Objectively, it is hard to criticize the standard V4 S, as Ducati’s recent improvements have made a significant improvement. But the changes to the SP2 put this Panigale on another level. The speed at which it turns, especially during fast direction changes, and the accuracy of its line just takes this motorcycle into a class of one.

In the very fast fourth- and fifth-gear turns toward the end of the lap, the SP2 could carry more corner speed every time, pinging from apex curb to exit curb and back to apex curb with such precision that it was no more than a few millimeters different each lap, despite doing over 150 mph.

The first section of Misano is ultra-technical, and all about clipping false apexes, letting the bike drift wide, then pulling it back into the corner proper. Clean exits are vital, none more so

Did you miss our previous article…
https://www.mansbrand.com/vespizzatevi-a-custom-vintage-vespa-from-2loud/

Dakar Rally: Audi Puts The RS Q e-tron to the Test in Morocco