We take a detailed look at the new Deeper CHIRP+ and compare it to its predecessor, the Pro+

Following on from our recent review of the Pro+ from Deeper, we now turn our attentions to the latest version, the CHIRP+, which was launched in early 2019. Inevitably, most anglers want to know what exactly the main differences are between these two castable echo sounders from the Lithuanian company. Is the CHIRP+ actually any better or more useful than the Pro+, when should you pick on over the other and should you part with your hard-earned cash to get one? We tested it over a number of weeks to find out… 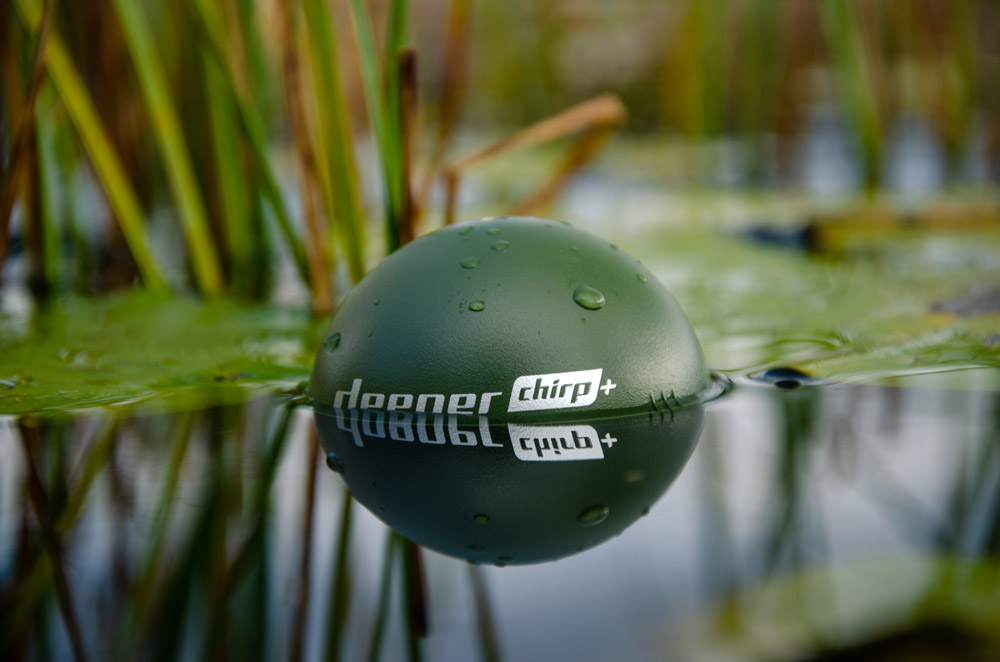 So, what is CHIRP?

The key difference between the Deeper Pro+ and CHIRP+ models is in the transducer used and how many, and how often, ultra-sound pulses are sent out into the water column. The Pro+ uses more conventional dual beam SONAR, which transmits fixed sound wave frequencies of either 290kHz (high/narrow beam, better for detail and deeper water) or 90kHz (wide/low beam, better for larger areas and shallower water).

However, the CHIRP+ – which stands for Compressed High-Intensity Radiated Pulse – emits a continuous flow of pulses ranging from low to high frequencies in a given beam (cone angle).  So, for example, the high CHIRP setting, which ranges from 635 to 715kHz in frequency on the CHIRP+, will produce one pulse at 635kHz followed by one at 636kHz and so on, all the way to 715kHz before starting over again. Deeper’s CHIRP+ is the world’s first castable, GPS-enabled, Wi-Fi echo sounder to utilises this CHIRP technology.

Without getting too technical, CHIRP simply results in a much clearer, more detailed image of fish, structures, features, weed beds or the bottom compared to non-CHIRP units. In addition to greater overall resolution, the CHIRP+ will produce images with better target separation, better deep-water penetration and decreased clutter (‘noise’) in a faster time than the Pro+. This means you can find features and fish more easily and more efficiently, as well as gain a better understanding of the lake, river or sea bed. 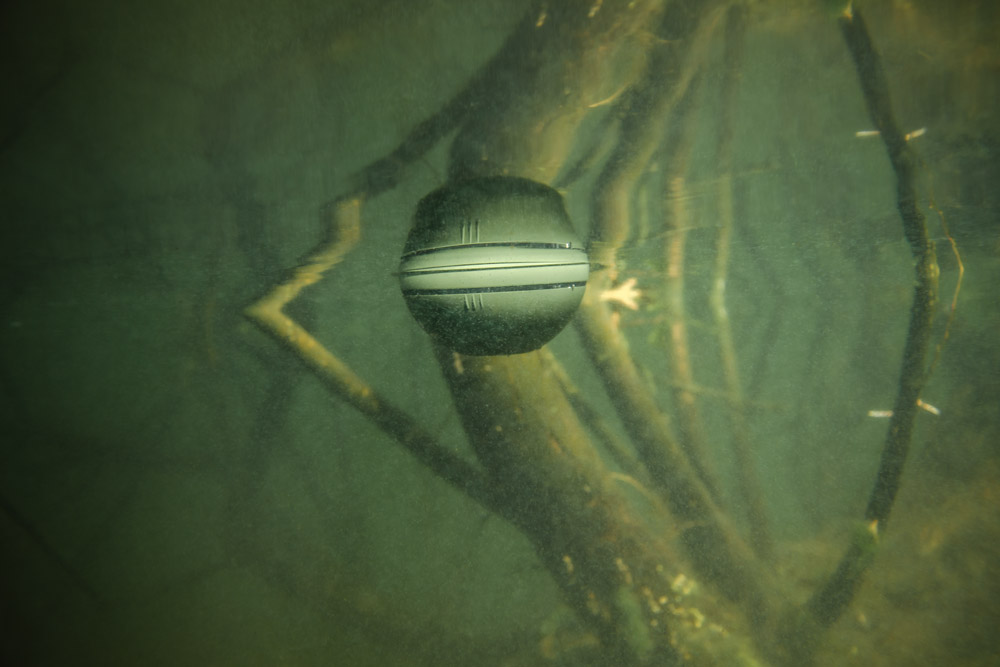 Other advantages of the CHIRP+ over the Pro+

Aside from more advanced SONAR technology, the CHIRP+ also offers a number of other technical improvements over its little brother, the Pro+. For example, unlike its predecessor, the CHIRP+ offers a very narrow beam angle of 7° (high CHIRP). Because this beam is more ‘focused’ and targeted, it allows you to see a massive amount of detail at pretty much all depths. However, because of how SONAR works, you are unable to use the high CHIRP frequency in very shallow water less than 1.8m (6ft). The CHIRP+ will automatically switch (if necessary) to the wide beam setting, providing great shallow water accuracy in depths as little as 15cm. In comparison, the Pro+ will not produce an image in depths of less than 50cm (a ‘too shallow’ warning will display on screen).

The CHIRP+ also narrowly beats the Pro+ when mapping deeper water. The narrowest angle beam (high CHIRP) penetrates to depths of 100m compared to the 80m of the Pro+ although it is the better all-round detail CHIRP provides at all depths that will be of most interest to anglers.

Target separation – the echo sounder’s ability to separate one target from another – is much improved in the CHIRP+ model, with a maximum of 1cm compared to 2.5cm in the Pro+. This means identifying different fish in a shoal, picking out a fish lying near the lakebed or mapping out the exact dimensions of an underwater snag is inherently more accurate.

In terms of hardware, although both models are exactly the same size, Deeper have shaved 10g off the newer model (90g vs. 100g). Battery performance is also slightly improved with the CHIRP+ featuring a higher-capacity 950mAh battery over the 850mAh of the Pro+. Both last for around 6 hours on the most conservative settings but the CHIRP+ comes with ‘fast charge’ functionality meaning it can recharge from flat in just over half the time of the Pro+ (75 vs. 120 minutes) and go from zero to 80% charged in just 45 minutes. Obviously, this faster charge time is a big advantage when on the water or when trying to grab a quick fishing trip. Both models charge via standard USB ports.

Although both ‘plus’ models work via internal GPS (American satellites) to help pinpoint your location and aid accurate mapping, the CHIRP+ also works with alternative satellite systems such as GLONASS (Russia), Galileo (EU), BeiDou (China) and QZSS (Japan). This gives your CHIRP+ the chance to work with many more orbital satellites than the PRO+ (GPS only), resulting in better fixes and mapping accuracy, as well as much greater coverage worldwide.

The same accessories for the Pro+ are compatible with the CHIRP+ – a range of high-vis caps, a smartphone mount, a smartphone case and a dedicated flexible arm boat mount to convert your Deeper into a boat-based echo sounder. As with all other Deeper products, the CHIRP+ is operated via the free Deeper app (available for both iOS and Android). 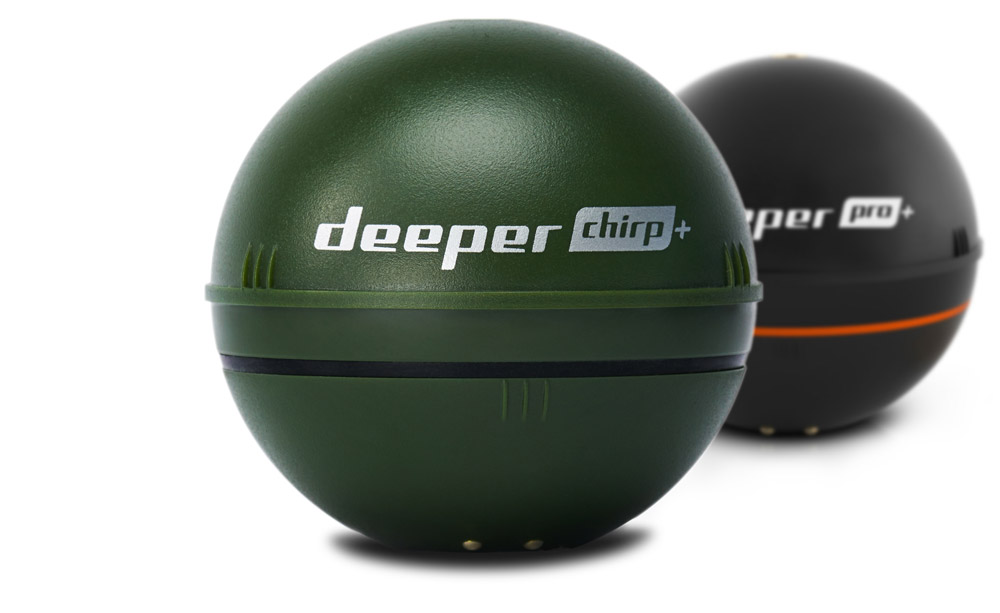 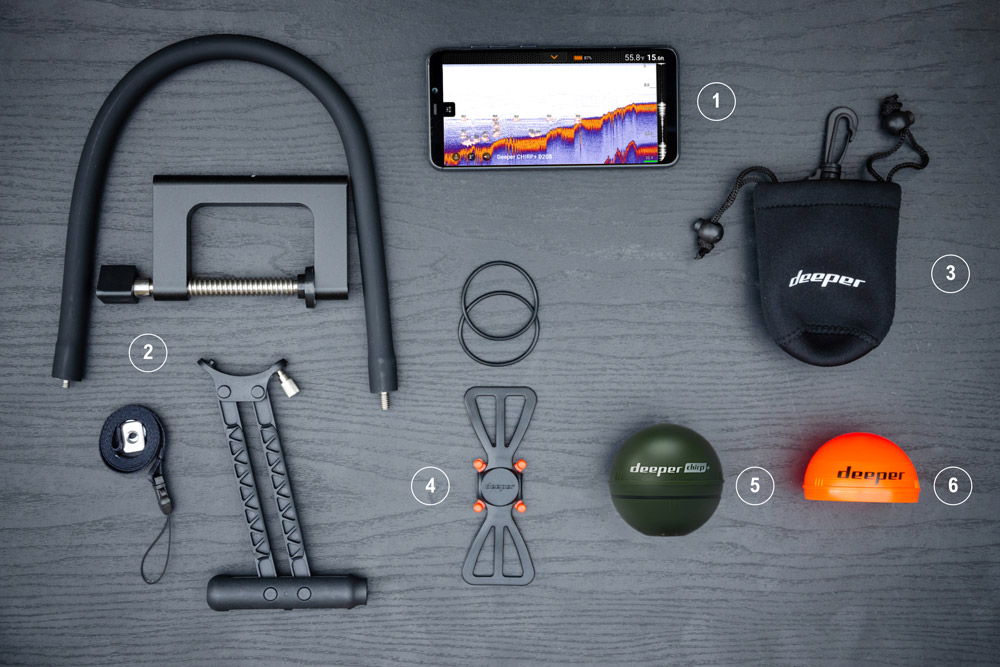 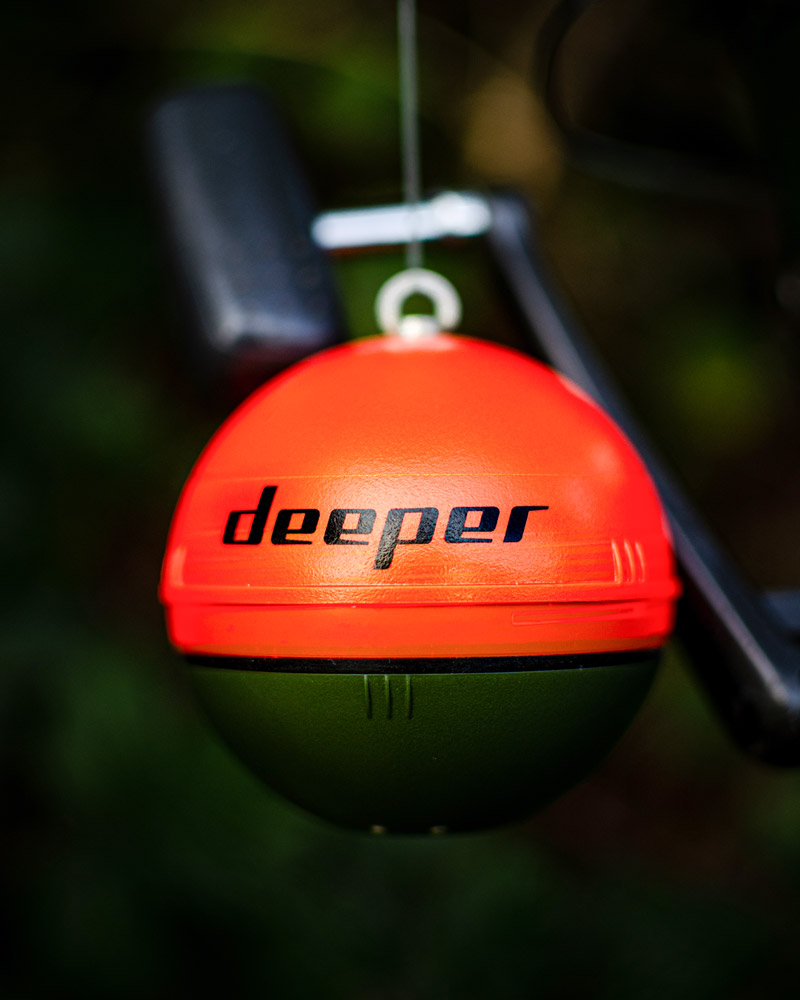 The verdict and some recommendations

In our testing the CHIRP+ clearly outperformed the Pro+ in terms of the level of detail and clarity displayed on screen. Underwater features and structures were identified more accurately and the CHIRP technology produced a much clearer image of bottom hardness and allowed a more accurate estimation of bottom make-up (i.e. silt, rock, weed etc.). Given its higher resolution, there was much less error in identifying weed and structure as fish, something which can happen occasionally with the Pro+.

It’s when working in ‘detailed’ smart imaging mode that the full benefit of the CHIRP+ becomes apparent. With this option toggled on, a much better estimation of the nature of the lake/riverbed was possible compared to the detailed mode of the Pro+.  In general, a thicker yellow-orange-red bottom line indicates a harder bed, with thinner blue-purple lines representing softer bottoms of silt and or weed. With some practice and familiarisation with the various settings it quickly becomes possible to reliably identify the nature of the bottom where you are casting with the CHIRP+, which can inform your presentation or method choice – and hopefully catch you more fish!

As with any castable echo sounder, the Wi-Fi signal from the CHIRP+ may become interrupted in higher winds and waves as the antenna loses a direct line to your smartphone or tablet – this is simply unavoidable in certain conditions. If the waves are rough it is recommended that you use a wide or medium beam rather than a narrow one to minimise signal loss.

As suggested in our previous Deeper review , a floating 20-30lb braided mainline, heavy mono shock-leader and stout carp/pike rod will really help with retrieving and casting the CHIRP+ although lighter set ups can be used with care. Using a heavier set up should enable you to reach distances approaching 100m, the limit of the device. 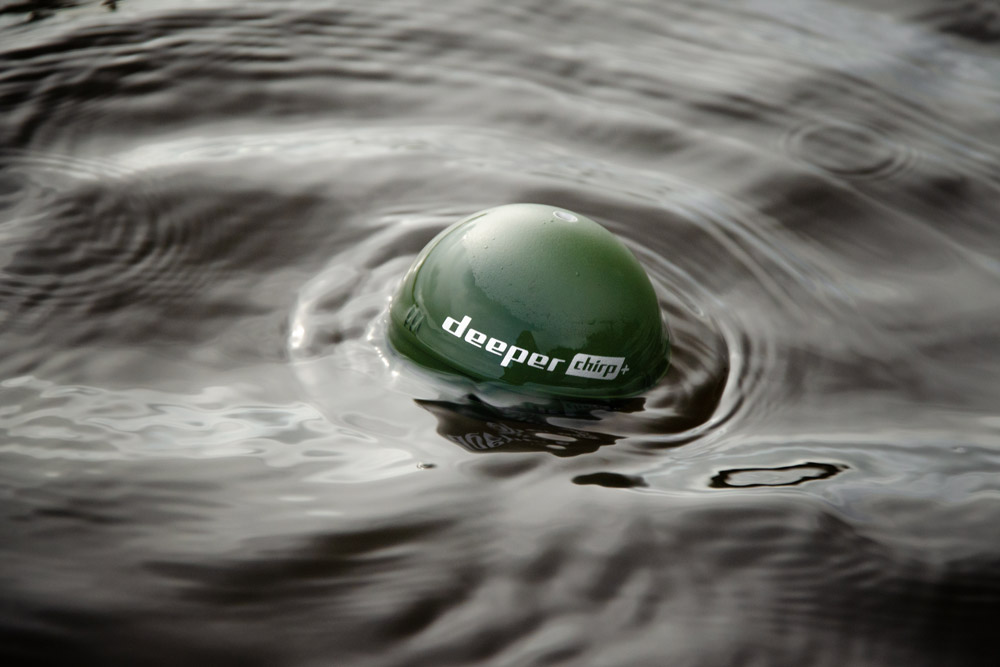 Clearly, both the Pro+ and CHIRP+ models from Deeper share many similarities in terms of design and functionality. They both help you to quickly figure out the depths, explore features, find fish and automatically map your chosen area for later reference. They are both very well-made, cast well, work from the bank or boat, send data via Wi-Fi to your phone or tablet, integrate seamlessly with the cloud (Deeper’s online ‘Lakebook’ service – full review to follow soon) and, ultimately, save you a fortune of time in sussing out your chosen fishing spot. They provide detail you simply could not get with a fishing rod alone and they are both incredible feats of technology, packing an impressive list of advanced components into a very small space. 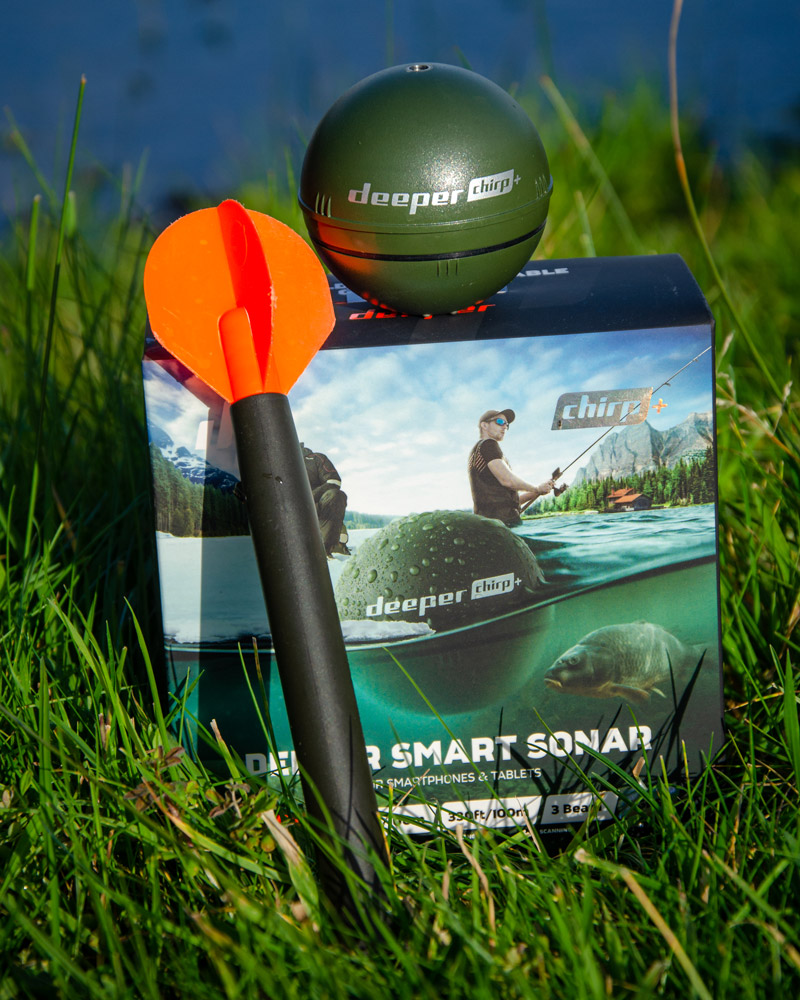 Similar to the progress made from the original Pro to Pro+ model, Deeper’s latest CHIRP+ represents a natural evolution in the world of castable echo sounders. Utilising CHIRP technology now means you can get a much more accurate image of what’s going on underwater, at a greater range of depths and in a quicker time frame.

If you are interested in purchasing a castable echo sounder from Deeper then is the extra €80 or so for the CHIRP+ worth it over the in-some-ways similar Pro+? In our opinion, if you can afford it, absolutely! The Deeper CHIRP+ is a significant advancement over the previous model. 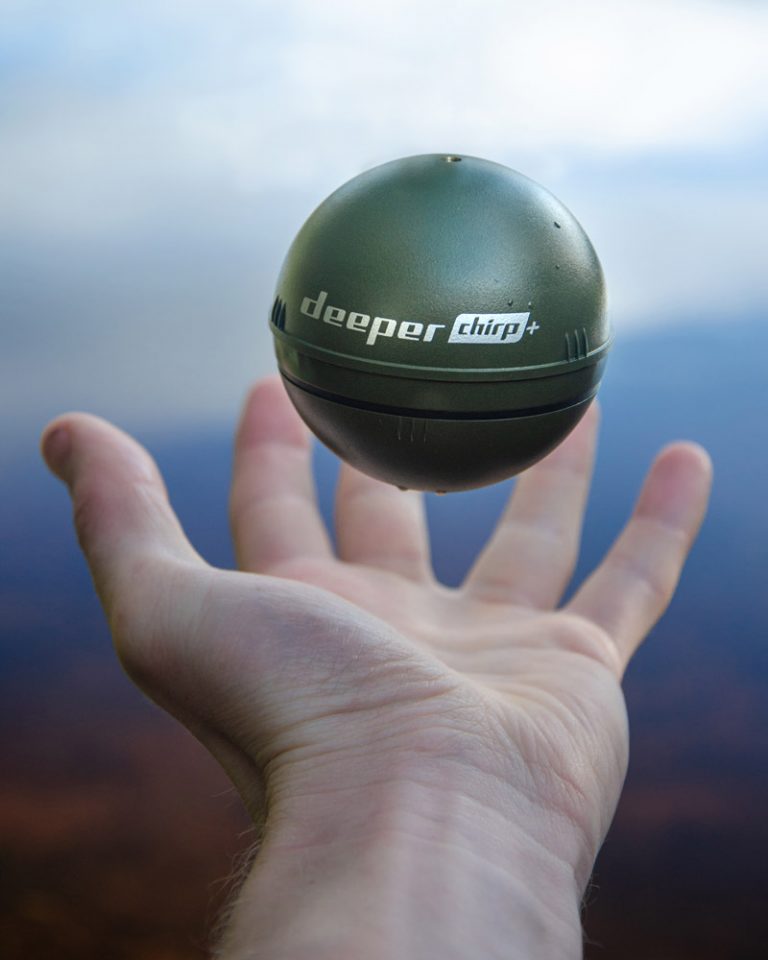 But, if you already have a Pro+, should you replace it with the latest incarnation? That choice is yours and depends on what you use your Deeper for. If you are only really focused on creating depth maps and occasionally looking for things like bait shoals then chances are the Pro+ will serve you very well for many years to come. However, if you wish to take your fish and structure identification up a level, or perhaps strike the perfect balance between a shore and boat-based echo sounder, then the CHIRP+ may well be just right for you.

Castable echo sounder technology isn’t perfect – yet – and the CHIRP+ isn’t without its limitations, but it is, by far and away, the closest anyone has come to date. Top marks, Deeper.

Did you miss our previous article…
https://www.mansbrand.com/gold-coast-tilapia-busters-2019-results/

Commission: The right amount for you business

Florida Fishing Seasons. Everything You Need to Learn