Want to have a collectible item, a piece of motorsport history, and help out promising young men and women all at the same time? Head on over to Bring a Trailer to bid on the 1956 Jaguar D-Type long-nose bonnet!

The winning bid will not only have a handmade piece of racing history, but they will also be able to support young men and women to get their skilled-trade education so they can pursue careers in automotive craft, restoration specialties, and service.

The bonnet was part of the award-winning author and race-car driver Joel E. Finn’s collection. Ann Smith Finn, Joe’s wife, graciously donated the bonnet to the Foundation. After Joel passed in 2017, Ann discovered the example in their barn. 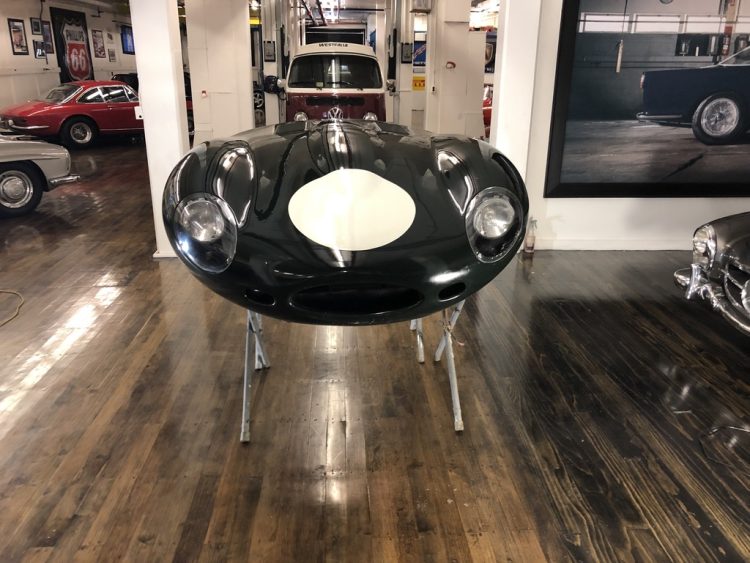 Even without a D-Type Jag, this historic and handmade bonnet will be a great addition to any car enthusiast’s wall.

The bonnet is made from aluminum alloy and is finished in British Racing Green. It does show some scuffs and scratches, but the latches and straps are intact. The Lucas Le Mans 24 headlamps and removable perspex covers are also operational and intact. The underside of the bonnet has a couple of riveted louver panels that flank the center bulge. There are also some scrapes, dirt, and some tape on the underside.

Larson and Skilleter’s Jaguar C-type, D-type & Lightweight E-type Register lists is as Jaguar chassis XKD 558. It had a short-nose bodywork when it was delivered new to a Jaguar distributor in Canada. It crashed in 1965; and in 1974, it was sent to Lynx Engineering in the UK to be restored.

Williams and Pritchard created a long-nose bodywork and it was fitted by Lynx. The restoration was finished in 1976.

The example eventually made its way back to the United States and XKD 558 was acquired by Joel Finn around 1990 and sold it a year later. Since the new owner wanted a short-nose bonnet installed, Mr. Finn held onto this hood and kept it in his collection. The Revs Institute was responsible for preserving most of Mr. Finn’s collection after his passing. The bonnet was kept separate, however, and recently it was donated to the Piston Foundation.

The Piston Foundation released a statement saying, “Just as our mission marries the needs of students with the needs of car enthusiasts, our plan unites the resources of 25+ million car enthusiasts, industry partners, and corporate sponsors as well as people at the very heart of car culture: people like the BaT community. Please consider joining us at the Piston Foundation and help make a positive impact in preserving the industry we all love. Learn more and donate at www.pistonfoundation.org.”

As of writing the Re-Creation Long-Nose Jaguar D-Type Bonnet has received a bid of $2,500. The charity bidding will end in 7 days. All proceeds including the fees by Bring A Trailer will be donated to The Piston Foundation.

Did you miss our previous article…
https://www.mansbrand.com/mercedes-benz-unveils-electric-car-co-designed-by-virgil-abloh/

ROLLING VINTAGE: This Snap-On Tools Re-Creation Van Is Made Of Memories