Another Maranello One-Off Presented: The Ferrari SP48 Unica (With Gallery)

Ferrari just unveiled the SP48 Unica, the latest addition to the One-Off series from Ferrari. It is now part of the most exclusive group in Maranello’s entire production. Designed and crafted based on the specifications of a single client, the unique and completely bespoke cars are a clear expression of their own individual requirements.

Under the direction of Chief Design Officer Flavio Manzoni, the Ferrari Styling Center designed the SP48 Unica as a two-seater sports Berlinetta developed on the F8 Tributo platform. Compared to the original model, its taut lines and aggressive stance make it immediately recognizable, and due to its arrow-shaped front profile, it is unmistakable too. To achieve this effect, they redesigned the headlights and relocated the brake air intakes.

One of the most important parts in the design of this unique new car is the considerable use of procedural-parametric modelling techniques and 3D prototyping (additive manufacturing) which allowed the Ferrari Styling Center designers as well as Maranello’s engineers to completely redesign the engine air intakes and the front grille. The advanced production process enabled the creation of the perfect 3D grilles that looks as if carved from a solid volume that creates a look of seamless continuity and dynamic fluidity. 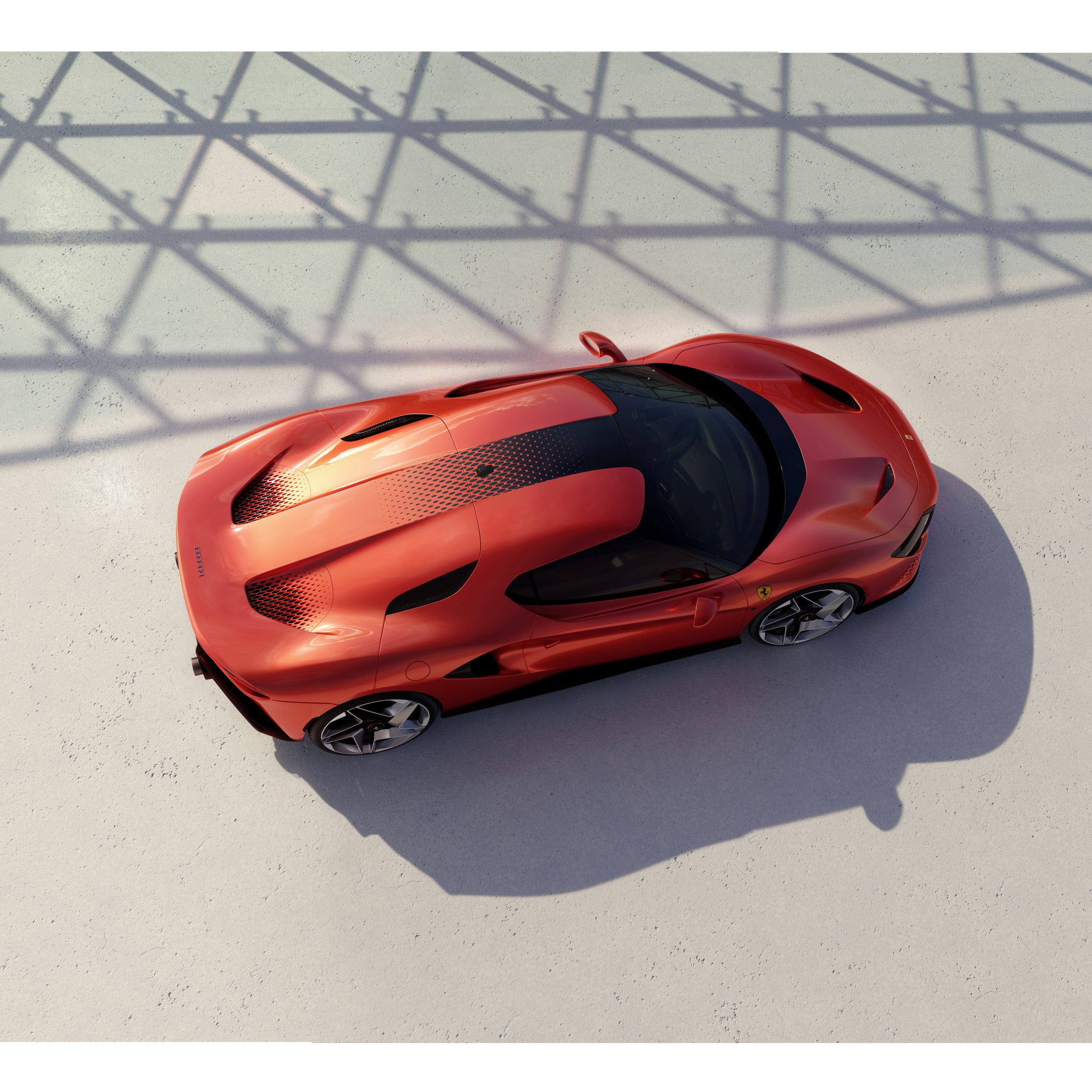 The procedural graphic solutions used on the bodywork blends perfectly with the grilles and the overall design of the SP48 Unica. The transition from the black in the roof, engine cover, and windows towards the body color is distinctly clear. Highlighting the powerful muscularity of the SP48 Unica is the striking visor effect of the front and it is emphasized by the smaller side windows and the non-existent rear screen, making it appear as if it was sculpted from a single block of metal.

In plain view, the central section of the roof, including the graphic representation of the air intakes is placed on the rear part of the carbon-fiber engine cover before the rear wing. This angle lets the viewer completely appreciate the styling research used on the SP48 Unica and shows the sophisticated symmetries and intersecting lines created by its forms.

The thermal-fluid-dynamic design of the SP48 Unica has been slowly perfected to guarantee that all cooling requirements are met as well as to provide a different aerodynamic balance. Some of the biggest deviations from the style of the F8 Tributo can be seen in the air intakes for cooling flows for the engine on the front bumper and under the rear spoiler. A deep procedural grille is placed in each air intake, and every section is perfectly angled to maximize the amount of air passing through.

The configuration of the car also let the engineers place an intercooler intake behind the side windows, and that positioning also allowed them to minimize the dimensions of the intakes on the flanks. Helping boost the rear downforce is the longer rear overhang that minimizes the suction from the roof area. 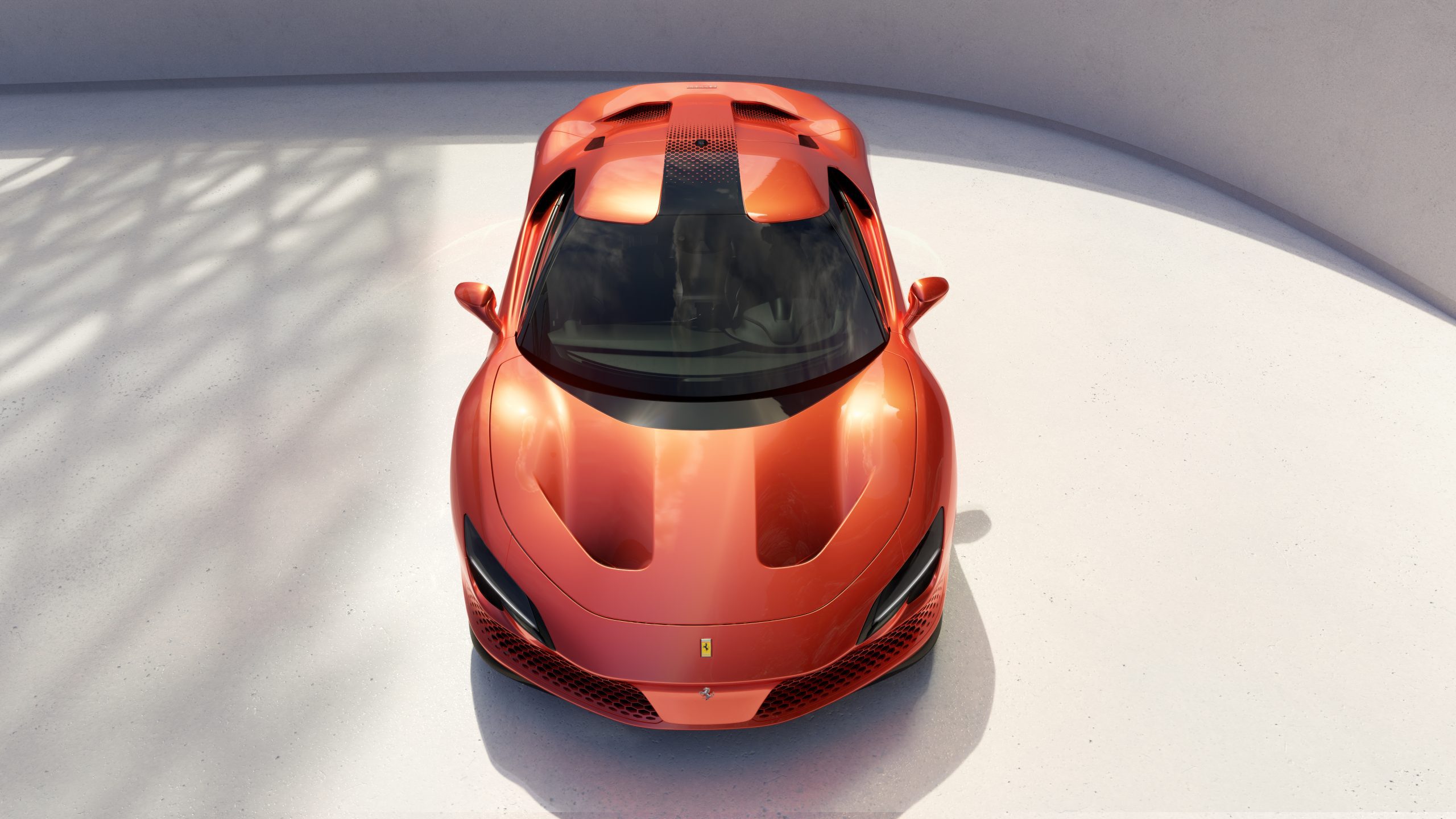 For the interior, the F9 Tributo’s technical identity was kept, excluding the rear screen. To set it apart, meticulous development work was used to create the perfect combination of color and trim to show the SP48 Unica’s sleek, sporty, and aggressive personality. This work can be seen in the specially developed black laser-perforated Alcantara® used on the seats and it can also be seen on most of the cabin trim, and underneath are glimpses of iridescent reddish-orange fabric that perfectly matches the exterior.

The interior motif is influenced by the hexagonal motif on the grilles and the procedural livery on the roof creating the seeming continuity between the interior and exterior. In the cockpit of the SP48 Unica, the polished sill covers showing the same laser-embossed hexagonal motif

By: Reggie
Title: Another Maranello One-Off Presented: The Ferrari SP48 Unica (With Gallery)
Sourced From: sportscardigest.com/another-maranello-one-off-presented-the-ferrari-sp48-unica-with-gallery/
Published Date: Thu, 05 May 2022 19:06:46 +0000

Did you miss our previous article…
https://www.mansbrand.com/auction-ex-jean-blaton-1981-porsche-928-s-offered-by-collecting-cars/

Goodwood SpeedWeek To Include World-Class Celebrations