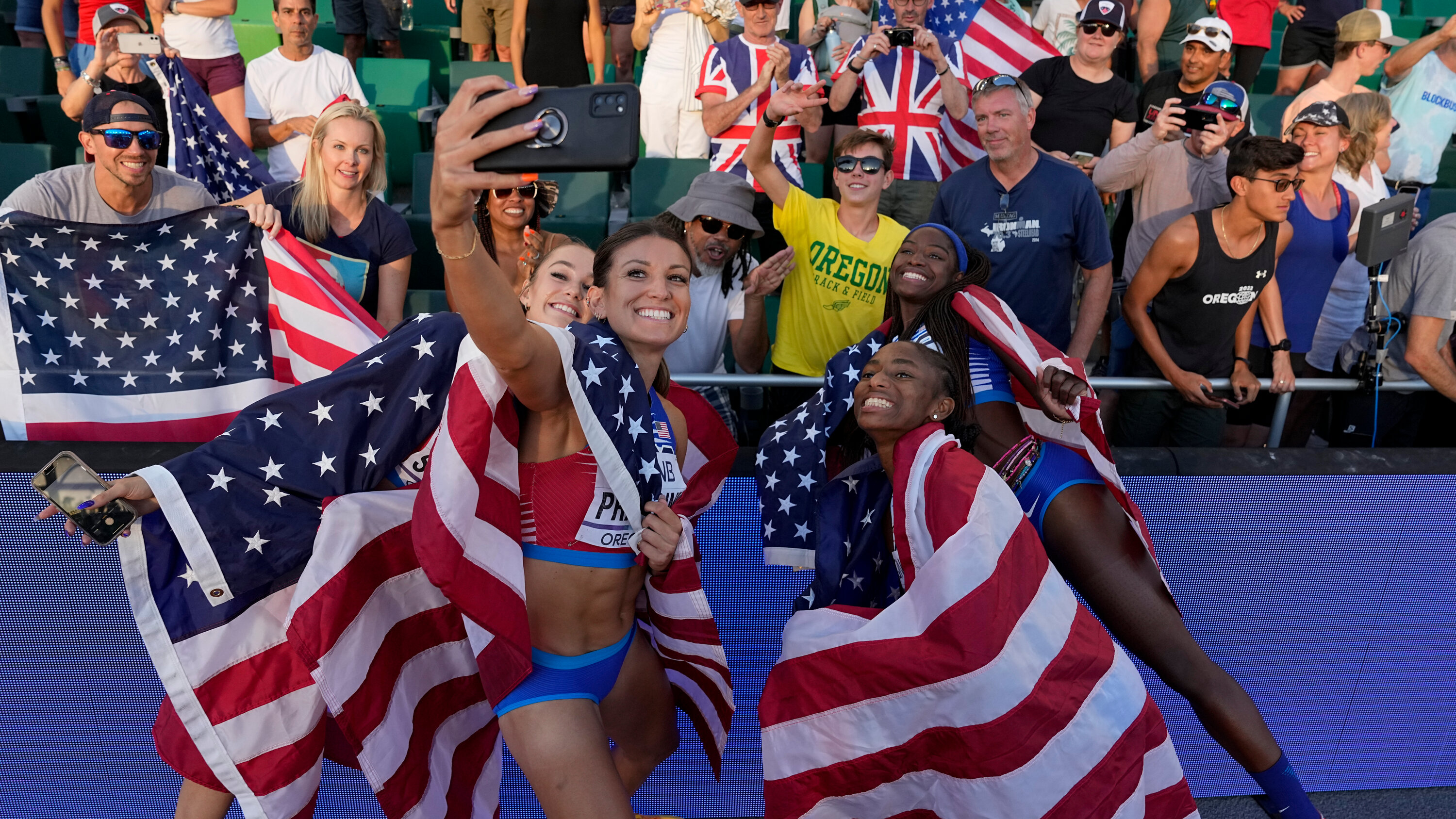 Kara Winger arrived at the track and field world championships as one of the most decorated javelin throwers in American history. A nine-time national champion, she had persevered through injuries, including two knee surgeries, to compete at four Olympic Games.

On Friday, though, Winger was in fifth place before her final throw at Hayward Field in Eugene, Ore., where the world championships were held. She had never won a medal in a global competition, and she plans to retire at the end of the season. This was her last shot.

“I’m two hours from my hometown,” said Winger, 36, who grew up in Vancouver, Wash., “and I felt like every single person in that stadium was cheering for me.”

For the first time, the track and field world championships were staged in the United States — and American athletes like Winger made the most of the experience. Winger saved her best for last, winning the silver medal with a ferocious final throw. She was still celebrating when Sydney McLaughlin, one of the U.S.’s most talented young stars, won the women’s 400-meter hurdles by breaking her own world record.

“The overall Team USA vibe — just seeing people all over the track and inside the oval completely dominating — has been incredibly fun to be a part of,” Winger said.

Track and field officials were hoping that hosting the world championships in the U.S. would help reignite American interest in the sport. And while athletes like Winger delivered, thrilling fans in Eugene, which has long been a track and field hotbed, one meet is not a cure-all. As Winger can attest, progress takes commitment.

“We need to be in this market,” said Sebastian Coe, the president of World Athletics, the global governing body of track and field. “It’s important. It’s not punching its weight.”

The world championships were a resounding success for American athletes. Entering Sunday, which was the final day of the 10-day competition, the U.S. had won 28 medals, 10 of them gold, far outpacing every other country. Ethiopia was next with 10 medals, four of them gold. Athing Mu won the women’s 800 meters Sunday night to add to the total.

And even as Allyson Felix, one of the most decorated athletes in U.S. history, made her final appearance in a national team uniform, a new crop of stars has already stepped forward to fill the void.

“This was really huge to have a meet in the U.S. where my whole family could be there, and it just made it a whole lot more enjoyable for sure,” McLaughlin said after her race. “Knowing that I’m in the same time zone that I train in, and all the advantages of having it on home soil, it really played to our advantage for sure.”

There was plenty of energy inside the stadium, but the event’s domestic reach seemed more limited.

Last weekend, a little more than 2 million people tuned in to NBC to watch the championships on Saturday and Sunday — smaller audiences than those that watched NBC’s same-day coverage of the British Open, which drew 3.3 million viewers on Saturday and 4.5 million for Sunday’s final round.

It hardly helped that viewers needed a spreadsheet to figure out what and how to watch. During the week, the world championships were broadcast on the USA Network, a cable channel that NBC owns, and on Peacock, NBC’s streaming service. (Track and field landed on Peacock when USA showed professional wrestling.)

The world championships are not an ideal spectator event. The meet stretches across the better part of two weeks, testing the patience of even the most dedicated fans. Coe left open the possibility of recalibrating — and perhaps compressing — the schedule in the future.

“I’m never going to jettison the philosophy and the history of our sport,” he said. “But I do think we have to recognize that 10 days, pretty much morning and evening, is quite a challenge.”

At the same time, Coe listed some of the inherent advantages that ought to help boost the popularity of track and field in the United States, starting with its powerhouse national team, which could have paid rent for the time its athletes spent on the medal podium at Hayward Field. The U.S. has around 50 million people who identify themselves as avid runners, Coe said. And at the high school level, hundreds of thousands of teenagers participate in track and field and in cross-country running.

But the U.S. has a “cluttered, complicated marketplace” for sports, Coe said.

“I’m probably not going to be Mr. Popular for saying this, but I don’t think in years past the sport has been marketed as well as it could have been in the U.S.,” Coe said. “I think there was a complacency for many years that it was enough to come back from the Olympic Games or a world championships atop the medal stand. I think there’s now a much greater recognition that, in itself, is important, but it isn’t enough.”

Organizers in the U.S. are experimenting with a variety of more fan-friendly events. They want top American athletes to stay in the U.S. for longer — most professionals spend their summers in Europe competing on the Diamond League circuit — and to get fans up close to the action at meets that are more compact.

Ahead of the 2028 Olympics in Los Angeles, World Athletics and U.S.A. Track & Field have partnered to form an initiative called “Project USA” as a way of driving investment in the sport. World Athletics is funding a documentary series in the style of Netflix’s “Drive to Survive,” which has enhanced the mainstream appeal of Formula 1 auto racing. A world road racing championships is in the works, Coe said, with several “high-profile cities in the U.S.” expressing interest in hosting events.

Coe also wants to continue to develop the Continental Tour, which operates in part as a sort of feeder system for track and field’s more upper-crust events.

“When we created the Continental Tour, there wasn’t a single American city that held their hand up that wanted to do that,” he said. “Now we’ve got two or three, and we need to grow that.”

Winger will compete in a couple of more events in Europe, and one in the Bahamas, before she calls it a career. She also works full-time for a company called Parity, which directs revenue toward female athletes.

“I am a passionate member of the community that I serve,” she said.

In Eugene, she was thrilled with the turnout — and with the attention that some of the lesser-known field events generated. She interacted with young athletes who told her they had started throwing the javelin in recent years and had watched her on Instagram.

“That does not happen for javelin throwers,” Winger said. “So the fact that it happened here is incredible.”

Read More
Did you miss our previous article…
https://www.mansbrand.com/beechdean-amr-adjusts-spa-lineup-gold-car-moves-to-silver/

Bruce Willis gets his very own category at the Razzie Awards

Grammys Ratings: The 2022 Awards Narrowly Miss Setting Back To Back All-Time Lows