A Strategic Marathon Ends With a World Championships Record 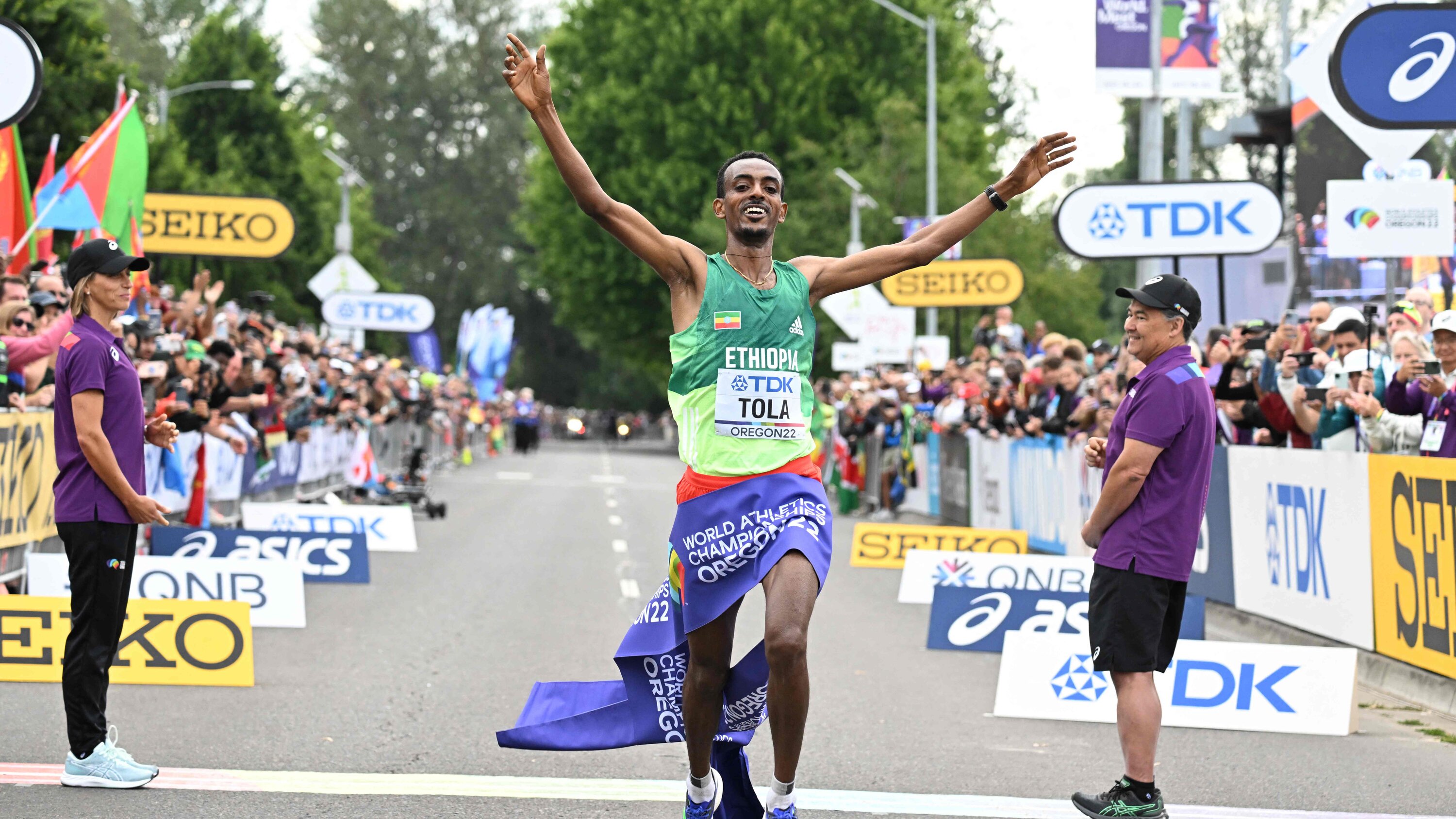 For 20 miles, the lead pack of a couple dozen men meant the marathon was anybody’s to win. But then Tamirat Tola from Ethiopia put down a surge on an uphill section of the course, and nobody elected to go with him. Tola stretched his lead to over a minute, and finished outside Autzen Stadium at the University of Oregon in 2 hours 5 minutes 36 seconds, a record for the world championships.

His compatriot Mosinet Geremew took second in 2:06:44, and Bashir Abdi from Belgium was four seconds behind in 2:06:48, repeating the bronze medal he won last year at the Tokyo Olympics.

The American men were not a factor in the race. Galen Rupp, running in the city where he attended college and in the state where he has lived all his life, looked comfortable for the large majority of the race. But he began fading around Mile 19, and even stopped during the race to stretch. His time of 2:09:36 was good for 19th place. He grimaced and doubled over as he crossed the finish line.

After the race, Rupp said he did not consider dropping out — “there was no way I wasn’t going to finish or get across that line,” he said — but did say he was still planning to run another marathon in the fall. He did not say where.

Rupp was followed by Americans Elkanah Kibet, in 24th place, and Colin Mickow, who fell at a drink station early in the race and needed medical attention after finishing in 46th place.

Tola’s victory is a bit of a surprise, though his skill was never in doubt. He won a bronze medal at the 2016 Olympics in the 10,000-meter race, and took second at the world championships in the marathon the next year. But he hasn’t had a top-three finish at a major marathon since.

After Tola’s surge, the number of contenders was quickly whittled down to five. Over the final few kilometers, however, Geremew and Abdi surged away from Cameron Levins of Canada and Geoffrey Kamworor of Kenya to win the remaining two medals.

Despite just missing out on a medal, Levins was visibly excited with his performance, which set a Canadian national record. As he was telling reporters about “the best race of his life,” he had to turn away to throw up, a telling contrast of the ecstasy and the agony of the marathon.

Conditions in Eugene were perfect for a fast marathon. Temperatures were in the mid-50s and it was cloudy for the 6:15 a.m. local time start. The three-loop course was fairly flat.

At times, the marathon felt more like a local 5K than a race featuring the fastest men in the world. Only about 60 athletes started the race, and they competed on a narrow course that wound its way through the recreational running trails of Alton Baker Park and back-and-forth across the Willamette River. At various points, packs of cyclists — not race officials, but just people on bikes — pedaled alongside the runners.

The narrow course looked especially treacherous at drink stations, as Mickow and the Israeli Maru Tefiri both fell while trying to grab their bottles, and many other runners were lucky not to suffer the same fate.

Mickow, talking to reporters from a wheelchair, said he was so focused on trying to grab the bottle that he just tripped. Both of his arms were scraped and bloody after the race. “I just wanted to tough it out,” he said.

While the field was strong by world championship standards, it might have disappointed fans used to the Olympics or big city marathons like New York or Berlin. Eliud Kipchoge, the world-record holder and Olympic gold medalist, skipped the race in favor of competing in a more lucrative fall marathon. Lawrence Cherono, who was fourth a year ago at the Tokyo Olympics, tested positive for a banned drug and was pulled just days before the start. The Japanese record-holder, Kengo Suzuki, tested positive for the coronavirus after arriving in Eugene and wasn’t allowed to start.

Lelisa Desisa, the defending world champion, looked to be struggling the whole race, and dropped out at the 18-mile mark.

‘WeCrashed:’ Jared Leto on What Drew Him to Adam Neumann and one of the Biggest Challenges of His Career