An online influence campaign carried out by a group that promotes China’s political interests is targeting Western companies that mine and process rare-earth elements, according to a new report from cybersecurity firm Mandiant. The campaign, which is playing out in Facebook groups and micro-targeted tweets, is trying to stoke environmentalist protests against the companies in the US.

The operation is attributed to an online group code-named Dragonbridge, which has also been responsible for campaigns claiming that covid-19 originated in the United States. Its latest campaign has increased in intensity in recent weeks as part of a strategic battle between China and its Western adversaries over who controls the precious resources and their own destiny.

“We are headed to a future where the likelihood of tools like influence operations being used against key industries will only increase,” says John Hultquist, Mandiant’s head of intelligence. “As competition between the US and China changes, the nature of the competition may become more aggressive.”

It’s also proof that influence campaigns are not easy: Dragonbridge has largely failed in its bid to draw negative attention to the Western companies. Shane Huntley, who directs Google’s Threat Analysis Group and has tracked Dragonbridge since 2019, previously tweeted that his team has taken an “aggressive” approach against the influence operation but that “it really is amazing for all the effort put in how LITTLE engagement these channels get from real viewers.” 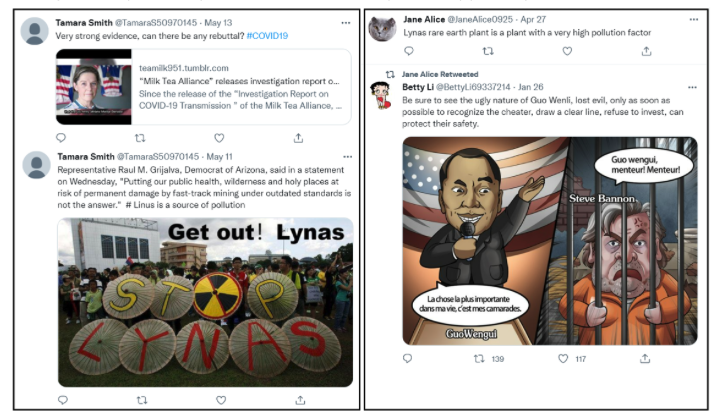 Rare-earth elements, such as cerium and neodymium, are the raw ingredients for just about any high-tech products—smartphones, fighter jets, electric vehicles, wind turbines.

China has come to dominate the market in recent years, and by 2017 the country produced over 80% of the world’s supply. Beijing achieved this by pouring resources into the study and mining of rare-earth elements for decades, building up six big state-owned firms and relaxing environmental regulations to enable low-cost and high-pollution methods. The country then rapidly increased rare-earth exports in the 1990s, a sudden rush that bankrupted international rivals. Further development of rare-earth industries is a strategic goal under Beijing’s Made in China 2025 strategy.

The country has demonstrated its dominance several times, most notably by stopping all shipments of the resources to Japan in 2010 during a maritime dispute. State media have warned that China could do the same to the United States.

The US and other Western nations have seen this monopoly as a critical weakness for their side. As a result, they have spent billions in recent years to get better at finding, mining, and processing the minerals.

Dragonbridge engaged in similar activity in 2021, soon after the American military signed an agreement with the Australian mining firm Lynas, the largest rare-earths company outside China, to build a processing plant in Texas.

Screenshots provided by Mandiant show accounts associated with Dragonbridge springing into action for micro-targeted influence campaigns. Claiming to be from Texas, Dragonbridge actors posted to a pre-existing anti-Lynas Facebook group declaring concerns about the environmental impact of mining and processing.  The group tried to incite protests, a tactic it also tried in the early days of the coronavirus pandemic.

The environmental concerns around rare earths are real. In fact, China’s dominance in the industry is due in part to the country’s weak environmental regulations. Faced with local backlash, China is now moving some rare-earth operations to Africa.

But though the mining operations can be environmentally harmful, these elements are widely considered absolutely necessary to meeting global carbon emissions goals and stemming climate change, because they are critical to cutting-edge clean technology like advanced batteries and electric vehicles. This reality will inevitably force difficult decisions and trade-offs.

“Rare-earth metals are such an important

5G will change how we think about communication

The best places to find extraterrestrial life in our solar system, ranked