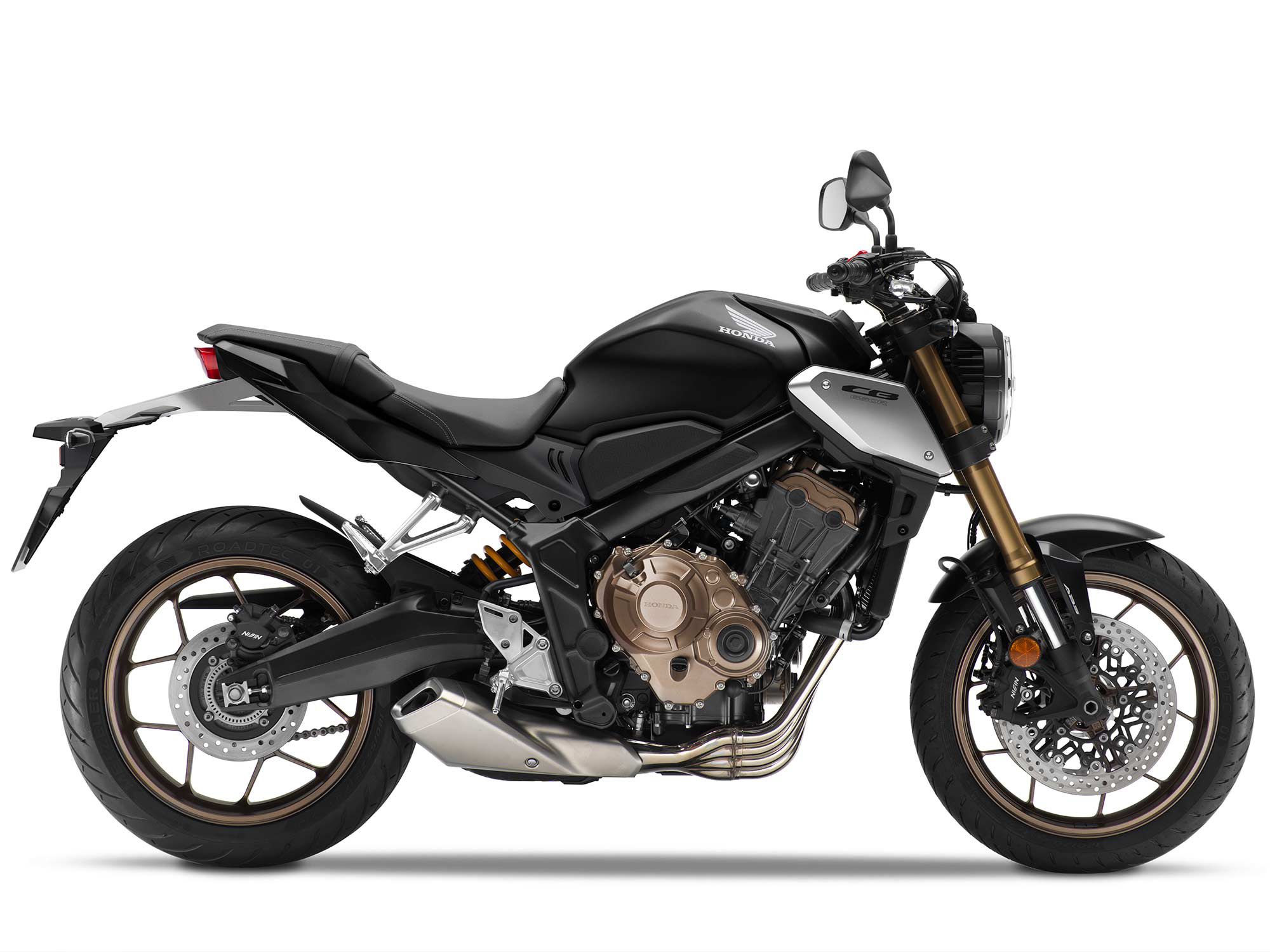 The CB650R slides in between the CB300R and CB1000R Black Edition in Honda’s Neo-Sports Café lineup. (Honda/)

Higher price than many of its competitors; also gets a $100 price hike from last yearSporty front suspension tracks well in turns, but its firmness can result in jarring feedback on bumps

Riders interested in a top-quality middleweight naked powered by an entertaining and high-revving inline-four will find the Honda CB650R is the only bike in the 650cc range that hits all those marks. All the other bikes in the category are of the two- and three-cylinder variety. However, the CB650R’s MSRP tops the list compared to the competition.

Inline four-cylinder engines have been a staple of Honda’s lineup since the 750 Four debuted in 1969. Fast-forward 50 years to 2019, when Honda’s CBR650F and CB650F middleweights were heavily revised and given the R suffix to better match the bike’s sporty performance. The outgoing streetfighter-styled CB650F was replaced with a freshly designed naked middleweight that now represents what Honda calls its Neo-Sports Café segment. This new styling, reminiscent of the late ‘90s/early ‘00s Hornet/Honda 599, is seen in today’s CB650R, modernized with blacked-out paint and burnished bronze detailing.

Today, the CB continues to bring the classic high-revving spirit of its flamboyant predecessors with its liquid-cooled 649cc mill. The CB650R claims a unique spot in today’s current middleweight class as being one of the only 650cc bikes equipped with an inline-four engine, unless your definition of “middleweight” includes the GSX-S750 or Z900.

The midsize CB makes for an appropriate step up from beginner bikes or a reintroduction to riding. Its engine, comfortable ergos, solid braking performance, and top quality receive top grades that, for those interested, may outweigh the somewhat unbalanced suspension and high price.

Nothing has changed for 2022. Honda made changes to the CB’s suspension, engine, ergo, and styling just last year.

The CB’s main competition comes from the Aprilia Tuono 660, Kawasaki Z650, Suzuki SV650, Triumph Trident 660, and Yamaha MT-07. Larger-displacement offerings like the Suzuki GSX-S750 might also be considered when shopping this class.

The twin-spar frame houses the same powerplant seen in the CBR650R, a liquid-cooled DOHC 649cc inline-four. The CB’s engine is tuned for high rpm, as is evident in its peak power figures and real-world character. As seen in our dyno test, its peak 81.9 hp is achieved at 10,870 rpm and its 42.97 lb.-ft. of torque at 7,960 rpm. At 7,000 rpm there is some vibration present; push it past 8,000 and the vibration diminishes. In any case, the ride is an exciting one. In our review, we noted that “aggressive riders will be entertained by the opportunity to push it to high rpm and draw out more of its raucous energy, but the linear way the power is delivered means the bike is also accessible to riders climbing the displacement ranks.”

A twist of the throttle rewards riders with crisp throttle response and addictive intake and exhaust sounds. Twin air ducts on

Did you miss our previous article…
https://www.mansbrand.com/speed-read-july-10-2022/

MINIBIKE MANIA: A Gallery of Two-Wheeled Collectibles That Took The Las Vegas Auction By Storm