13 Relationship Red Flags In Women You Should Never Ignore

So you think you’re dating the perfect woman…

You immediately hit it off with her, she looks amazing, your friends love her…only something isn’t quite right.

Arguments keep breaking out and tension is building up.

Identify them sooner rather than later and you can work to resolve issues or end the relationship before anyone gets hurt.

The problem is, some red flags are agonizingly subtle, particularly when you’ve only known a girl for a short period of time.

I’ve had my share of rocky relationships and wish I’d learned to recognize these months earlier than I did.

That’s why I’ve plugged myself into the Reddit hivemind to save you the pain and share the most common red flags men have noticed, often too late to save themselves:

This article is sponsored by Roman who provides ED treatments for men. 52% of guys will experience erectile dysfunction but how many are talking about it? I want to change that.

With Roman you get a diagnosis from an American healthcare professional and genuine medication delivered to your door in discreet, unmarked packaging.

Click here for a FREE online visit, and if approved get $15 off your first order of ED treatment plus FREE two-day shipping.

These first four points come as a package deal. They are the result of the 40 years experience John Gottman has as a recognized relationship expert and professor emeritus at the University of Washington. He says men should be on the lookout for criticism, contempt, defensiveness and stonewalling. Together, he calls them the four horsemen of an apocalyptic relationship.

Relationship Red Flags In Women #1 She Criticizes You

Now there’s a big difference between complaining and criticizing:

Complaining is “I was concerned when you were running late and didn’t call me.”

Criticizing is “You’re not forgetful, you’re selfish. You never think of me!”

Everyone lashes out and criticizes from time to time, we’re only human. But, repeatedly using you as an emotional punching bag shouldn’t be tolerated and can lead to the other three horsemen.

Relationship Red Flags In Women #2 She Treats You With Contempt

To treat someone with contempt means using mockery, sarcasm and disrespect. Essentially, it means your girlfriend is not taking discussions seriously.

What effect is this going to have on you? It will make you feel unloved and devalued. Nobody deserves this, so if this seems familiar you should try to work on this as a couple.

Relationship Red Flags In Women #3 She Gets Defensive

The third horseman of an apocalyptic relationship comes in the form of blaming other people for their own problems.

When someone makes a mistake, they can either say sorry and admit they made a mistake or defend themself. Defensiveness will only escalate the conflict though, it places the blame on someone else.

In life, but especially in a relationship, ‘sorry’ is a golden word. If your girlfriend won’t say it to you and own her mistakes (because nobody is flawless) then this is a sign you

Relationship Red Flags In Women#4 She Stonewalls You

Stonewalling is an alternative route to contempt that people in a relationship sometimes take. Instead of your girlfriend not taking a conversation seriously, she refuses to engage.

John Gottman says refusing to talk, acting busy or otherwise evading and refusing to participate with you means your girlfriend is physiologically flooded and is not in a place where she can have a rational discussion.

If this sounds familiar, you need to take a break. For some people, it could be as little as 20 minutes just to calm down, for others it could be days or more in which case you might want to consider if you are committed to the relationship.

This next red flag I saw come up frequently on Reddit: 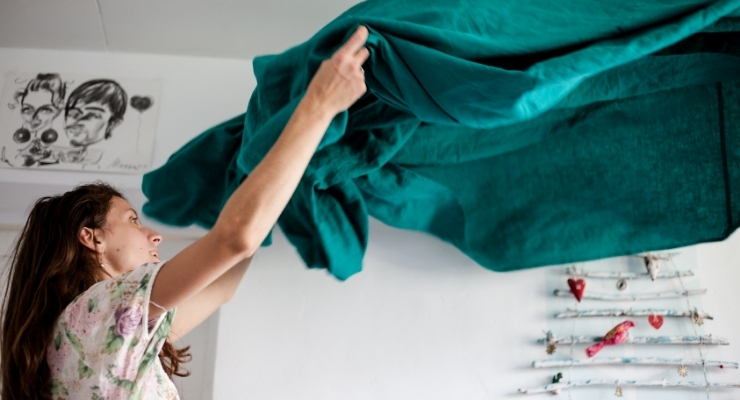 This seems small, right? Moving into a place with your girlfriend can be a really exciting moment in a relationship.

Yet, it could lead to arguments, here’s why:

Does your girlfriend like things tidier? She will always be upset with you for not cleaning up more often.

Does your girlfriend not tidy up after herself? She will become increasingly frustrated she can’t leave things where they are.

The frustration between the two of you will build over time and this is a deeply ingrained habit that is very hard to change. It’s not impossible to overcome, but I strongly suggest you find out how tidy your girlfriend is before making any major decisions.

Relationship Red Flags In Women #6 She Has Poor Self-Esteem

This red flag might seem harsh, but it’s the truth.

If your girlfriend cannot make themselves happy, they will drain all your willpower and mental energy trying to do it for them.

Everyone needs an emotional pick-me-up now and then. How is she going to do that for you though if you have to be constantly ready to support for her?

One of the hardest lessons in life I’ve had to learn is: You have to love yourself before you can love someone else.

I’m going to come right out and say it, your girlfriend chatting to her ex on a regular basis if they broke up less than 6 months ago is a really bad sign.

Chatting to an ex from time to time is ok. In fact, I would even argue that a girl blocking every one of her exes is a red flag all of its own.

BUT, frequent contact with her immediate ex indicates the relationship is not fully over. You should prepare yourself for the fact there is a good chance you could end up becoming ‘the rebound boyfriend’.

Relationship Red Flags In Women #8 She Is A Drama Queen

Does this one sound familiar?

Somehow, nobody has it worse than your girlfriend. Everything is a soap opera and everyone has a vendetta against her – or so she says.

Engaging in oneupmanship is a contest with no winner.

As on Redditor put it:

“If you’re sick, she’s on her deathbed”

You won’t feel emotionally supported which is incredibly important.

Relationship Red Flags In Women #9 She Does Not Read

If you’re anything like me, you love to read. Maybe you attend courses at the local college or university to expand your horizons, maybe you’re just a generally curious person. If your girlfriend isn’t interested in reading and learning or even looks down on these things, that’s a very bad sign.

As a quick litmus test, ask a girl on a first date if she is reading a book currently. If she hasn’t read any book in the last year, you might want to enquire why that is. Life can be hectic, but a year is a long time…

Ultimately, you are the sum of the people you surround yourself with. How can you learn and grow as a person if your girlfriend or wife is not developing alongside you and not encouraging you?

Want to recommend a book to your girlfriend? Here are 25 books everyone should read.

I love when my wife messages me when she’s out and about. It tells me she’s thinking of me. There’s a natural limit to this though.

Here’s what one Redditor said about an ex though:

“When I told her we texted too much, she would text me saying there were things she wanted to text me about but didn’t because she thought I would get mad at her for texting.”

If your girlfriend is messaging you every hour of the day and expecting you to respond every time, this is overstepping natural boundaries. It will get in the way of you doing focused, productive work and spending quality time with friends and family out of business hours.

Gossip is sometimes looked down on, but it has played an important function in society for thousands of years – after all, how would one man know another man is a good hunter without already going hunting with them? They would hear it on the grapevine.

Gossip is one thing but what you should never do is share another person’s secrets. If your girlfriend is doing this, she is breaking a bond of trust with her friends by going behind their backs. This also means she is likely sharing your secrets too so be careful what you say.

Here’s a tongue twister a Redditor said they heard as a kid:

Think about it, what’s worse? Someone doing something embarrassing or someone gleefully telling the world about it?

Relationship Red Flags In Women #12 She Plays Games With You

A girl who enjoys playing head games, testing you…

It doesn’t matter if you’re 18 or 88. However old you are, I promise you you’re too old for her and her games. Enough said.

We’re not in high school, and you aren’t on the Bachelorette. Be honest, sincere, and forthcoming, and we’ll get along just fine. I’m in my mid-thirties, and thus am too old and rickety to jump through hoops.

Relationship Red Flags In Women #13 Using You To Cheat

The hard truth is, they will break up with you too when the next ‘Mr Right’ comes along.

It can be difficult to face objective facts when you’re in a relationship. I hope these red flags help you recognize if you’re in a difficult relationship or, if you don’t see any of these, maybe just appreciate what you’ve got!

By: Antonio
Title: 13 Relationship Red Flags In Women You Should Never Ignore
Sourced From: www.realmenrealstyle.com/relationship-red-flags-women/
Published Date: Thu, 06 May 2021 11:55:51 +0000